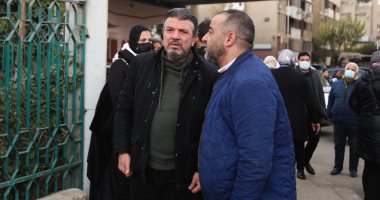 A little while ago, the funeral of Dr. Amal Salama, the sister of the artist Ahmed Salama and the aunt of the artist Sarah Salama, from the Al-Salam Mosque in Nasr City, who died at dawn today, Wednesday, after a struggle with heart disease, inside a hospital in Nasr City..

The artist Ahmed Salama told “The Seventh Day”, that his sister died of heart disease, as she underwent an open-heart surgery during the past months, and she continued to suffer from the symptoms of the operation for a while until she died..

It is noteworthy that the last work of the artist Ahmed Salama is the series “Street 9”, which is of the type of works of the 45 episodes, written by Hussein Mustafa Muharram and directed by Mohamed Abdel-Khaleq, and starring: Rania Youssef, Mahmoud Abdel-Mughni, Nermin Al-Fiqi, Hoda Al-Etrebi, Saba Al-Rafei, Yasser Ali Maher, Ahmed Jamal Said, Hossam Fares, Abeer Mounir, Ahmed Al-Demerdash, Majed Al-Sharif, and a number of other young artists, which is currently shown on one of the Arab satellite channels..

Finally and for the first time: The shocking truth was revealed… A dangerous secret behind Nour El Sharif’s refusal to act with Cinderella Soad Hosni forever!