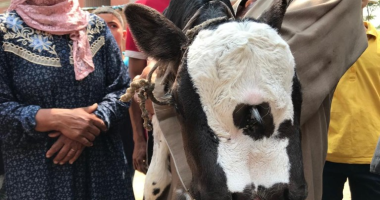 The seventh day presented a live broadcast from the village of Rajabiya in the district of Al-Santa Center in Gharbia Governorate, about a rare case of the birth of a calf with 3 eyes, jaws, two tongues, one brain and two ears, the property of a village farmer in a rare phenomenon.

The people of the village confirmed that the strange thing is the birth of a calf with 3 eyes, jaws and two tongues in one head, as it was born naturally in the past hours, as it was placed under observation for a week because it needed direct breastfeeding and had difficulty swallowing due to the presence of two tongues.

Dr. Ahmed Al-Hawari, a veterinarian, confirmed that this case occurs due to an abnormal growth of the fetus and that this case needs a scientific study, stressing that the mother did not suffer from any congenital defects and is in good health after birth.

Sources in the Directorate of Veterinary Medicine in Gharbia said that the real causes of the birth defect of the calf, circulating on the social networking site “Facebook”, are currently being studied, stressing that the newborn with such defects does not live long.

70,000 Ukrainian Army Surrounded by Russian Army Russian Media: The Battle of East Ukraine May Come to an End | Blog Post

25 Italian Recipes That Are Easier Than You Thought