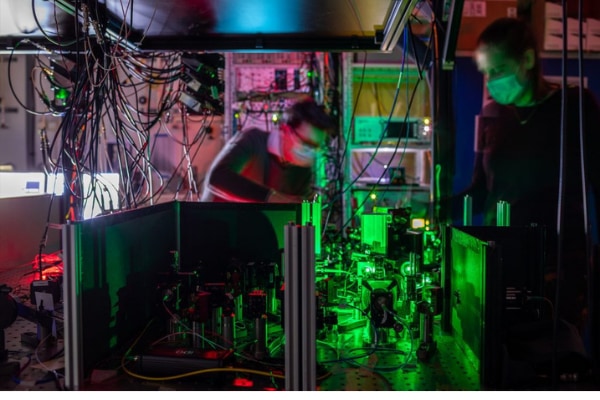 quantumTeleportation is explained here and there, so many of you may have heard of it.

When listening to such commentary, many people may be confused when they explain that it is not a technology that conveys information instantly, even though it is called teleportation.

Therefore, let’s first make an image of what the communication method called quantum teleportation does, and then start the explanation of this research.

The term quantum teleportation is a theory that emerged from Einstein’s EPR thought experiment, which he created to criticize Bohr.

I will omit the point of what the EPR thought experiment is like here.

If you don’t want to skip it, please refer to the article below.

Quantum Mechanics Learned from History[Revised Edition 4 (Final Chapter)]”It can be said that no one understands quantum mechanics.”

In quantum teleportation, we think that two particles in an entangled state overlap each other in opposite states.

At this time,Observing one particle confirms the state of the otherTo do.

If the observed electron spin is clockwise, the spin of the other electron is determined to be counterclockwise at that moment.

Wasn’t it decided from the beginning? You might think, but it’s not. It is decided the moment you see it.

Therefore, which state was the unobserved electron in which the twin electron was observed? This means that we received the information instantly beyond the speed of light.

This is called quantum teleportation.

This type of story is usually explained by the analogy of the sender of information, Alice, trying to send information to Bob.

If Alice in England sends one of the entangled electrons to Bob in Japan and then conveys the observations, Bob can know the state without looking at the electrons.

However, with this alone, I don’t really understand what is amazing.

Quantum teleportation has no meaning when used alone.

With this, there is no need to exchange entangled particles one by one.

So AliceTangle one of the two entangled particles with another.。

This other particle isQubit, which is the information that you originally want to sendis.

And Alice observes these two particles indistinguishable. This is called bell measurement, and the result is communicated to Bob by classical communication.

Then,You can know the state of the qubit (particle X) that does not exist in Bob’s handIt is.

In other words, the qubits that are not interacting at all teleport to Bob’s hand.

This is so-called quantum teleportation communication.

When quantum teleportation communication is performed between outer spaces 10,000 light-years away, it will take 10,000 years even if information can be exchanged at the maximum speed of light.

Then, why do you bother to make such a troublesome communication?It is theoretically impossible for a third party to eavesdrop on this communication.That’s why.

First, Alice sends the entangled particle B to Bob.

If a third party eavesdrops on this particle, the entanglement will be destroyed and Alice and Bob can immediately drop the communication.

So what if you just eavesdrop on the bell measurement results?

Of course, this measurement result alone has no meaning. Without observing the entangled particle B, the state of the particle X, which is the original information that we wanted to send, cannot be reproduced.

For this reasonQuantum teleportation is attracting attention as a next-generation highly confidential communication technology.It is.

Various studies have been conducted to realize this technology.

However, the reality is that it is still far from being realized.

Earlier, I gave an analogy as communication between the United Kingdom and Japan, but in reality such long-distance communication cannot be realized with this technology.

The main reason for this is the cornerstone of this technology.The entangled particles (photons) are so unstable that they cannot carry long distances while maintaining the entangled state.Because.

Optical fiberIf you send a photon in a tangled state, the loss will be too large and it is highly possible that it will disappear in the middle.

In some studies so far, we have succeeded in communicating several tens of kilometers, but it is thought that it will be difficult to significantly increase the communication distance.

Therefore, this research technology is important.