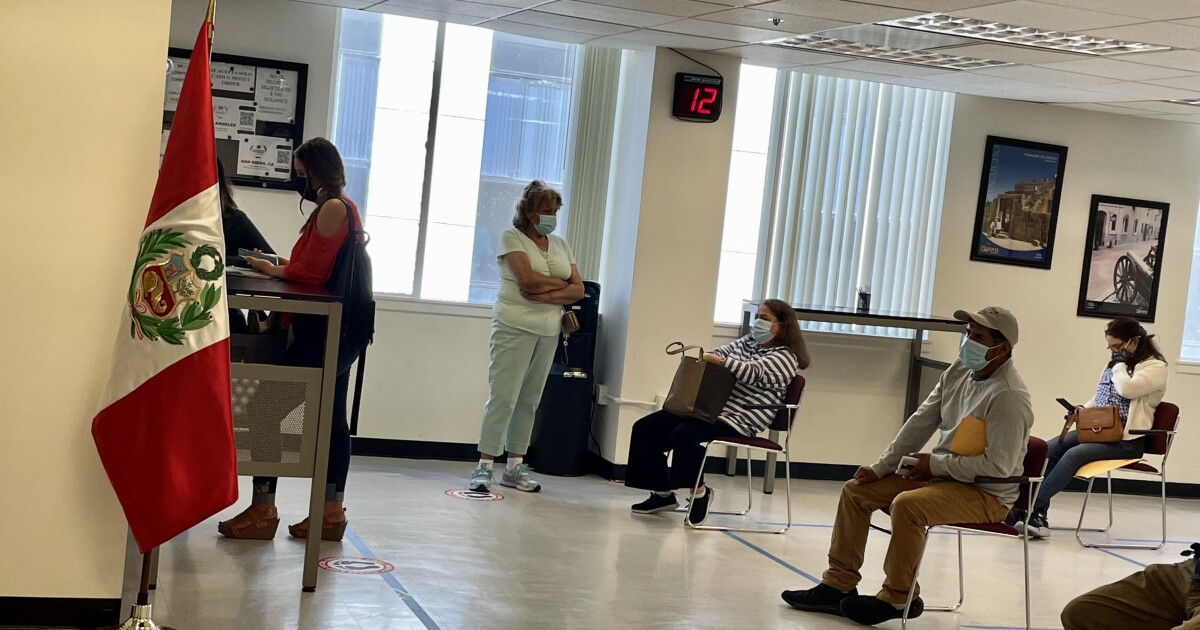 In the midst of the pandemic, the Peruvian consulate in Los Angeles never closed its doors, and now that the restrictions have been modified, the authorities have had to reinvent themselves to meet an increased demand for services, using an appointment system to facilitate procedures. .

“We have put one more person in passports, we are working overtime in the case of public deeds; in the DNI we have another person [más], the demand has grown in the case of the DNI by 200% or 300%”, assured Chávez, detailing that the staff amounts to 15 employees.

According to the diplomat, the cascade effect has originated due to the fact that many of his compatriots have not been able to travel as a result of the coronavirus emergency.

In the past, travelers carried out many of the procedures in Lima, but now that they have not left, users have to carry out all the services at the consular office.

“Since they cannot travel, they have to give a power of attorney or public deed so that their attorney in Peru can make any transaction,” explained the consul general.

In order to maintain social distancing, appointments have been staggered every 10 to 15 minutes. To schedule a service, users must contact the consulate via email or phone. “The most effective thing is the mail,” Chavez said.

In 2020, due to the closure of the airport in Lima, many Peruvians were stranded outside its borders. Authorities estimate that some 10,000 people were trapped in the United States.

That emergency, says the consul, forced them to mobilize so that some 800 people who were in Los Angeles could return to their land.

“Two planes left here with about 250 Peruvian passengers and many others, hundreds, left via Houston and others via Miami,” the official explained, detailing that they also gave financial support to some 350 people “so that they could survive in those weeks when there were no flights.

In the midst of these tasks, the consulate continued to operate. It was only closed at the end of December due to the fact that two employees of the government office were infected with COVID.

“We have had a record of consular actions in the midst of a pandemic, we have carried out nearly 12,000 procedures,” he assured.

Chávez, 45, is a lawyer by profession. In 1999 he entered the Peruvian diplomatic academy and after passing through Argentina, Venezuela and Mexico, he arrived in Los Angeles in July 2019 as attached consul general.

At the beginning of 2021, with the departure of Gino Giorffino, Chávez was appointed consul general, being aware of the strength that characterizes his community.

“There is always room for improvement,” said the native of Arequipa, expressing respect for the management of his predecessors, detailing that in this office there is a lot of demand for passport, DNI and powers of attorney services. “In a circumstance of greater demand it is more complicated to make the changes,” he acknowledged.

In the midst of the restrictions, Chávez assured that they recently brought itinerant services to their compatriots in Phoenix (Arizona). Right now they are planning extraordinary days in the cities of Bakersfield and San Diego, as part of the regular work of this consulate.

“Normally we go twice a year,” said the consul about the visits to those three cities.

In 2020, community events were suspended, if this year the local authorities allow it, in July they hope to celebrate the national holidays, an effort in which the consulate will join as on other occasions.

“We hope that this returns to normal, that it improves, and we are always ready to support any initiative that the community has,” he assured.

“Keep taking care of yourselves, don’t let your guard down,” Chavez suggested as a message to his countrymen to follow the health instructions of local authorities.

They vandalize and protest against punctured tires in Las Americas

Copia Global raises $50 million to accelerate its expansion in Africa