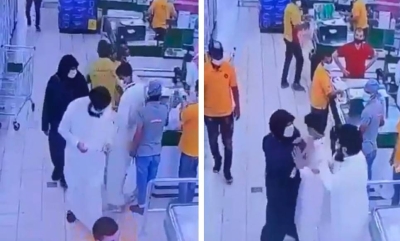 Al-Marsad newspaper: A video clip showed the moment two young men deliberately collided with a third inside a “hypermarket” in one of the Kingdom’s regions.

The video indicated that one of the two young men deliberately collided with the third person who was parked in one direction, then his colleague grabbed him, pushed him and dropped him to the ground.

The young man got up and started a clash with the two and punched them, but they quickly dealt severe blows to him before some of the people intervened to prevent them.

The two young men remained ready for a permanent clash with the third young man alone, to the extent that one of them insisted on going to him, bypassing everyone present, and indeed managed to catch him.

In the video, a Bahraini content maker reveals his income from “YouTube”… and explains ways to increase the income of “YouTubers”

Signs that your boss is toxic