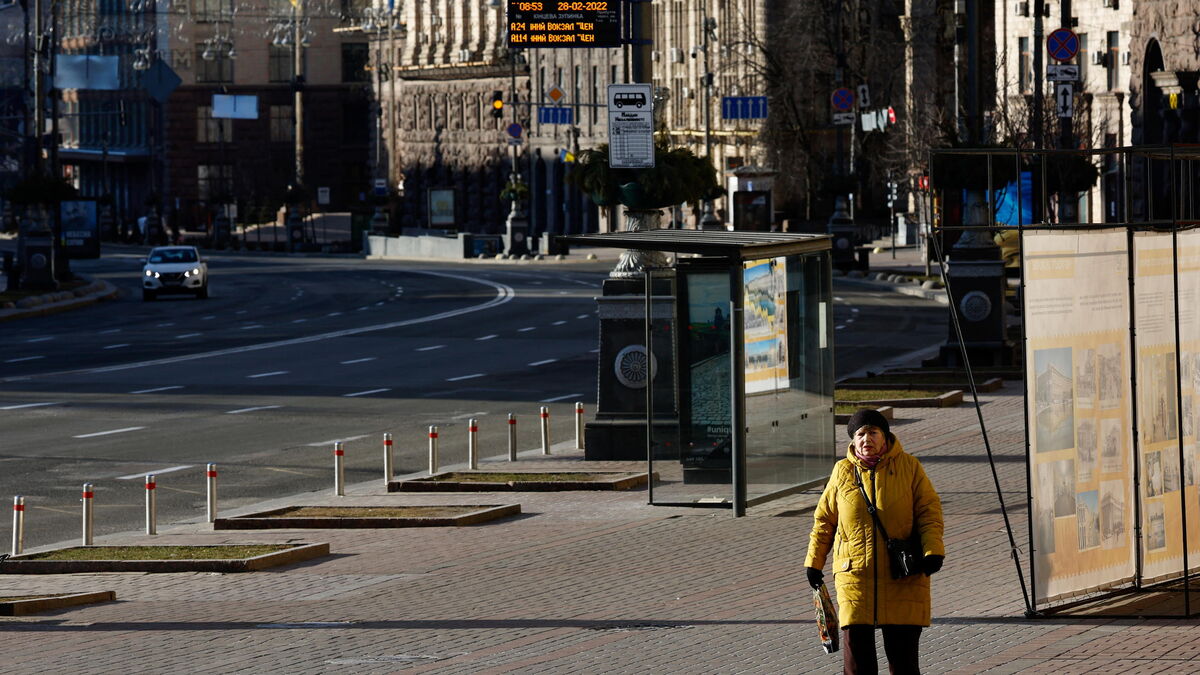 While talks are to open this Monday morning between Russians and Ukrainians on the Belarusian border, sporadic fighting continued on the fifth day of the Russian invasion. Late Sunday evening, Ukrainian President Volodymyr Zelensky ruled, during talks with Boris Johnson and the Polish President, that Monday would be “decisive”.

After a few hours of calm, several explosions sounded this Monday at dawn in Kiev, whose suburbs are still resisting the offensive. Russian missiles were fired, one of which hit installations at Sofiivska Borschahivka, on the outskirts of Kiev. New satellite images showed a nearly 5km long column heading towards the Ukrainian capital on Sunday. Advancing then near Ivankiv, 60 km from Kiev, on a road leading there, it was made up of tanks, infantry vehicles, self-propelled artillery pieces as well as fuel trucks and logistic vehicles.

In Kharkiv as in Kiev, the authorities say they are keeping control but the situation is fragile. In its 6 a.m. briefing, the Ukrainian army asserts that “the Russian occupiers have slowed down the pace of their offensive”, but they continue to advance following “four straight lines”. Russian forces continued to target “military and civilian airfields”, “military checkpoints” and numerous critical infrastructures.

After a weekend in hiding, shops reopened at 8 a.m. (7 a.m. French time), and the metro should be running again, but the municipality has asked residents to only go out if necessary. The curfew remains in effect at night, from 10 p.m. to 7 a.m. The Russian army assured on Monday that civilians could leave “freely” Kiev, the capital of Ukraine, while accusing the Ukrainian authorities of using them as human shields.

“All civilians in the city can leave the Ukrainian capital freely via the Kiev-Vassylkiv highway”, southwest of the capital, Russian Defense Ministry spokesman Igor Konashenkov said on television. further claimed “air supremacy” throughout Ukraine.

Zhytomyr is located 140 km west of Kiev and has 267,000 inhabitants; Chernigiv, 65 km from the Belarusian border, has 287,000 inhabitants. According to the Ukrainians, Russian Iskander tactical missiles were fired from Belarus at Zhytomyr airport. Residential areas were reportedly hit and civilians injured. Anti-aircraft sirens sounded in many cities overnight, including in Zaporizhzhya, a city near the Black Sea, on the Dnieper.

Early on Monday, during a press briefing, the spokesperson for the Russian Ministry of Defense assured that the Russian forces had full control of the area around the Zaporizhzhya nuclear power plant. “Nuclear power plant personnel continue to operate the plant and monitor radiation levels as usual,” according to Igor Konashenkov.

Donetsk separatists have their troops

At dawn on Monday, the Donetsk People’s Republic (DPR) suspended its call for mobilization. “The necessary number of positions that the mobilization aimed to fill has already been filled,” DPR leader Denis Pushilin said in a statement broadcast on the Rossiya 24 television channel.

Ukraine, a member of the European Union?

During the night, Ukrainian President Volodymyr Zelensky claimed to have, during a discussion with Ursula Von der Leyen, “talked about concrete decisions on the strengthening of Ukraine’s defense capabilities, macro-financial assistance and the accession of Ukraine to the European Union.

Also had a phone conversation with @vonderleyen. Talked about concrete decisions on strengthening Ukraine’s defense capabilities, macro-financial assistance and Ukraine’s membership in the #I.

Casualties on both sides

Ukraine announced a grim toll on Sunday: 352 civilians have been killed since the start of the Russian invasion, overnight from Wednesday to Thursday, and 1,684 have been injured. Ukrainian forces claim to have killed nearly 4,500 Russian soldiers; they have set up a website listing photos and identity papers of dead or captured Russian soldiers, supposedly so that their families know their fate.

For its part, Russia recognized for the first time on Sunday that there were dead and wounded on both sides. Without giving numbers, she said her losses were “considerably lower” than those of Ukraine.

On Sunday, Russian Defense Ministry spokesman Igor Konashenkov accused Ukrainian troops of torturing Russian soldiers they take prisoner. “We know how the Ukrainian Nazis treat the few captured Russian servicemen. And we see the same torture that was perpetrated by the German Nazis and their police henchmen during the Great Patriotic War,” he said. In the aftermath, the head of the Russian Investigative Committee, Alexander Bastrykin, ordered to “take comprehensive measures to record every act of torture by Ukrainian troops”.

“It’s a scandal”, plague Bosz after the controversy of the goal refused in Lyon

The ruble in very sharp fall at the opening of quotations