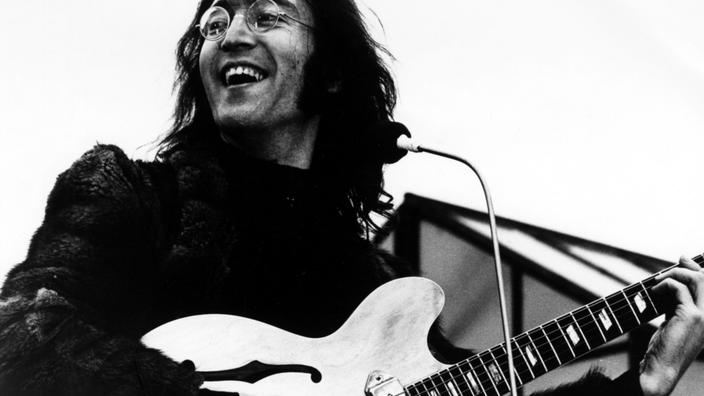 An audio cassette with a recording of John Lennon in which we can notably hear the murdered singer of the Beatles performing an unpublished work, produced in 1970 during an unknown stay in Denmark, will be auctioned in Copenhagen on September 28, a-t- we learned Tuesday, September 14.

Read alsoThe disc dedicated by John Lennon to his killer on the day of his death, sold at auction

Estimated between 27,000 and 40,000 euros, this 33-minute recording is being sold by a band of four men, then teenagers, who had met the singer of the Beatles, who came to spend part of the winter of 1969-1970 in a remote corner on the west coast of Denmark.

«The recording is totally unique because it is a conversation. It takes place after (a) press conference, with the four high school students and a few journalists and John Lennon plays them a few songs. One of them, Radio Peace, has never been published“Bruun Rasmussen auction house manager Alexa Bruun Rasmussen told AFP. Before emphasizing again: “ It’s a little piece of Danish history and when you listen to it, you can tell John Lennon felt good in Denmark. He was left alone and he could just live his life.»

Read alsoJohn Lennon: poems and drawings up for auction in New York

At the end of December 1969, in a forgotten episode, John Lennon arrives in the Scandinavian kingdom with Yoko Ono to get closer to Kyoko, the latter’s daughter, who then lives with her father in North Jutland (west). First gone unnoticed, this visit, which will last only a few weeks, calls out and the star organizes a press conference.

A nostalgic work to listen to on a cassette player

Following a combination of incredible circumstances, because of the hateful weather, the four high school students find themselves interviewing him after the formal meeting, in a relaxed atmosphere. “I believe they have experienced the ‘hygge’, this Danish art of living which favors well-being in everyday life, joked Alexa Bruun Rasmussen.

The teenagers were above all interested in the peace activism of the musician, a few months before the dissolution of the Beatles. “With this auction they want to convey John Lennon’s message», Said the head of the Danish house.

Alexa Bruun Rasmussen also praised the unique charm of this recording, sold with the photographs of the meeting and the number of the school newspaper that relates it, which also derives from its outdated appearance. And last detail which adds to the appeal of this unpublished work by John Lennon: “To listen to the 33 minutes of the tape you will need a good old fashioned player and I think that bit of nostalgia adds to its value.»