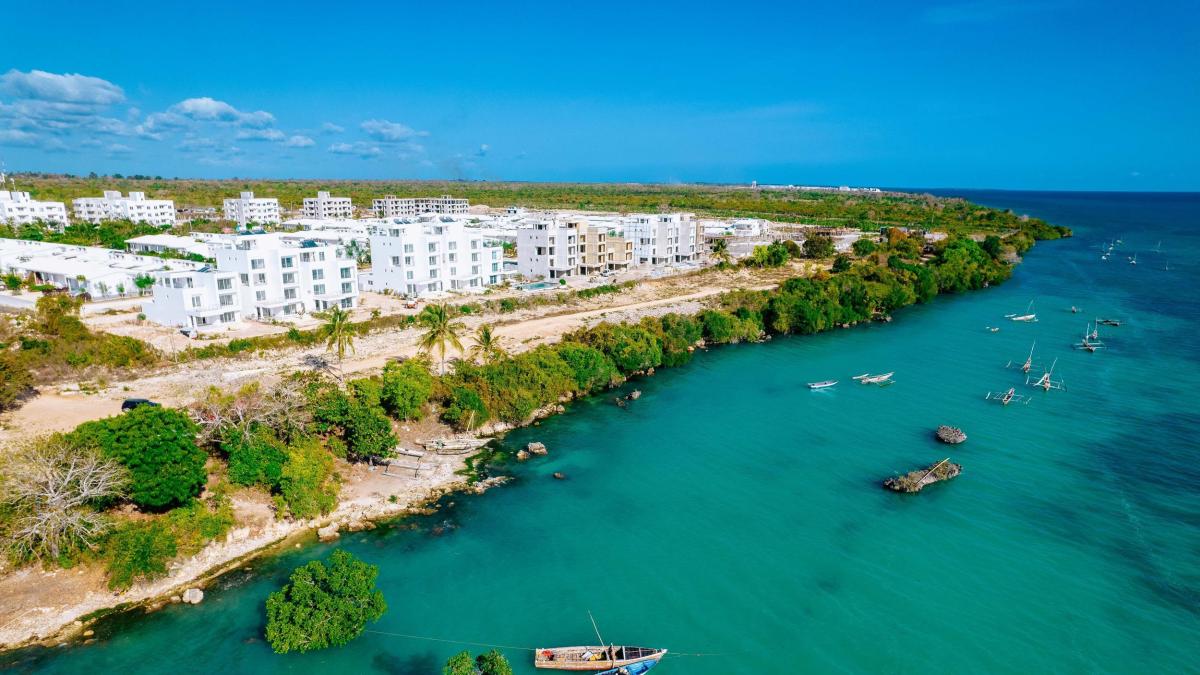 LSmiling violinist Buja Ali plays a cheerful lunchtime concert under a mango tree for around 20 picnic guests. They come from Germany, Poland, the USA and the capital Zanzibar City, which is only a few minutes away by car. Some of them live here, most are on vacation – in the middle of the Corona period.

Mwatima Juma is the boss of the farm, who welcomes the colorful crowd of guests that day. On raffia mats and beautifully laid pallets, she serves a buffet of Swahili specialties typical of the country, from bananas in coconut sauce to chicken curry, everything from her own farm.

Juma, 54, has a doctorate in agricultural economics and is a role model for many. She organizes a kind of green box on the Tanzanian holiday island of Zanzibar, a delivery service for households and hotels. She is also the mother of the new young Minister of Commerce, Mudrick R. Soraga, who wants to boost sales of vacation rentals in Zanzibar with tax breaks and resident visas.

Two Leipzig brothers, Sebastian and Tobias Dietzold, who grew up as missionary sons in Africa after reunification, are already building a green city called Fumba Town near the island’s capital. Studio apartments are available there from as little as 25,000 euros. Instead of asphalt, there are cobblestones so that rainwater can seep into the ground. 94 percent of the waste is to be recycled.

Another project by the Dietzolds: On the east coast, they are building modern holiday apartments in ecological timber construction around an artificial lagoon – with co-working areas on shady roof terraces for digital nomads. The accommodations of the first construction phase of “The Soul” were sold out in a few months. Now 70 more apartments from around 60,000 euros are coming onto the market in the popular kitesurfer hangout Paje.

Despite Corona, Zanzibar is easy going

The island in the Indian Ocean rode the first waves of corona with almost no fear of death. According to entry statistics, 142,263 tourists enjoyed themselves there in the first pandemic winter from January to March 2021, more than ever before. Most came untested on special flights from Russia and other Eastern European countries.

Then the Vice President of Zanzibar and the President of Tanzania, John Magufuli, died. One quite sure and the other suspected of Covid-19. The current head of government, Samia Suluhu Hassan, finally reversed the pandemic. From the Serengeti to Zanzibar, she changed entry rules.

Anyone who currently wants to go to the beach or climb Kilimanjaro must present a negative PCR test that is not older than 96 hours. 75,000 jobs depend on the holiday business in Zanzibar. Tests and vaccinations for the local population were introduced.

So a lot has normalized on Zanzibar, the island is no longer an outsider. The rules of conduct, however, have remained relaxed. Even in the second Corona winter, masks hardly have to be worn anywhere. Many hoteliers report: fully booked.

With tropical temperatures around 30 degrees, almost everything takes place outside anyway, from picnic trips to nightlife, from a stroll through the UNESCO-protected old town to a tour of spice farms in the interior of the island. “Our beaches are so isolated that little contact is the norm and not the exception,” says hotel manager and fashion designer Francesca Scalfari.

Hotels with terraces at dizzy heights

Zanzibar is different from the other luxurious islands in the Indian Ocean, ie the Maldives, Seychelles and Mauritius. One enjoys rather simple pleasures here. You can buy handmade seaweed soaps in souvenir shops, listen to live music in beach clubs and enjoy the sunset with a cool wine on historic roof terraces of Arab-Indian trading palaces.

Perhaps the finest of these terraces belong to the Emerson Group. She operates in the old town two boutique hotels and restaurants with red velvet upholstery, traditional menus and taarab music. None of the 70 employees have been laid off during the pandemic. 120-year-old wooden stairs lead to the airy realms above the city.

The hotel, on the other hand, creates a radical bridge to modernity “Love House”. Young holidaymakers from all over the world meet there for a sundowner by the glass pool on the fifth floor. You often hear the word “wow” when you first look over a sea of ​​corrugated iron roofs and the ex-sultan’s palace House of Wonder (Beit-al-Ajaib), part of which collapsed in 2020.

Most vacationers are attracted by the beaches on the island

Zanzibar belonged to the Sultanate of Oman for 200 years before it was united with Tanganyika in a violent coup in 1964 to form Tanzania. Shortly before that, the country had become independent from Great Britain.

The current Nobel Prize winner for literature, Abdulrazak Gurnah, is a son of the island. He has increasingly drawn attention to the colonial and post-colonial past of his homeland. The stirring books by the author, who fled to England in 1968, are not yet to be found in the shop windows of the old town.

From Tanzania to South Africa

Unesco has already warned that the preservation of the historic sites leaves a lot to be desired. Most travelers come anyway for the climate and sea. White sand beaches and coral coves especially along the east and north coasts fringe Zanzibar.

Tourism defies the pandemic – and is expanding

Scientists speculate why Africa, with the exception of South Africa, has so far come through the corona pandemic relatively unscathed. The WHO representative in Zanzibar, Ghirmay Andemichael, attributes this primarily to an extremely young population, the warm climate, different immune requirements and a lack of tests.

Zanzibar is likely to be one of the few holiday destinations in the world that the pandemic has brought dozens of new hotels and unusual events. The Romanian Sunwave electronic music festival has completely relocated from Bucharest to Zanzibar in June 2021. Travelers who were drawn to Bali before the pandemic are now finding spiritual flair in East Africa, for example in the hotel Raz Sharazad “ with a yoga platform and moonlight meditations in the adjoining spa.

The Finnish star chef Jussi Husa opened his first restaurant near Matemwe in the northeast after 20 years as head chef of large houses “Mzee Husa” with puristic wooden furniture. Among other things, he serves sushi with freshly caught fish and aubergine millefeuille.

A hit on the same stretch of beach on Sundays is Melia Executive Chef Mayaven’s creative burger brunch at Alankalee „Gabi Beach Restaurant“. Alan, as everyone calls him, is from Mauritius.

Probably the best hotel on the island, the five-star hotel built by a Prague businessman “Zuri Hotel & Spa”, kept afloat during the pandemic with holidaymakers who flew in by private jet right away. In the meantime, package tours are also possible again. TUI is expanding its offer in Zanzibar with the “TUI Blue Bahari” and a Riu hotel that is currently being expanded.

Where the Spice Island wants to go in the future, she doesn’t know exactly yet. It is often booked in combination with a Serengeti safari or a climbing tour on Kilimanjaro. Zanzibar’s Economics Minister is banking on eco-luxury – and is currently offering nine of the 50 islands in the archipelago for lease. There is already an underwater hotel on the neighboring island of Pemba.

Massoud Salim, who is a bit reminiscent of Jimi Hendrix, doesn’t care much: the influential networker has just opened a restaurant, the “Archipelago Waterfront”, on Stone Town’s city beach. Against the backdrop of palaces and mosques, locals and holidaymakers meet here for traditional spiced coffee.

With pioneers like these, Zanzibar’s future as a casual individual destination with accommodations in every price range looks set to last for a while, despite the ongoing pandemic.

Getting there: The cheapest flights to Zanzibar are Turkish Airlines with a stopover in Istanbul and Qatar Airways via the Doha hub. Eurowings Discover and the Swiss charter airline Edelweiss fly directly to the island from Frankfurt and Zurich.

Entry and Corona situation: Tanzania is currently classified as a high risk area with a travel warning. German citizens need a visa to enter Tanzania, which according to the Federal Foreign Office can be obtained from the embassy or applied for an e-visa should be. A health form must be submitted 24 hours before entry. A negative PCR test must not be older than 96 hours at departure. This provides up-to-date information Foreign Office on its website.

Bless you: Vaccinations are not required for entry directly from Germany. Anyone entering the country from a neighboring yellow fever area needs an appropriate vaccination. According to the Federal Foreign Office, there is a high risk of malaria in Zanzibar. It is best for holidaymakers to seek advice from a travel medicine specialist.

Profit taking falls in oil as US inventories increase