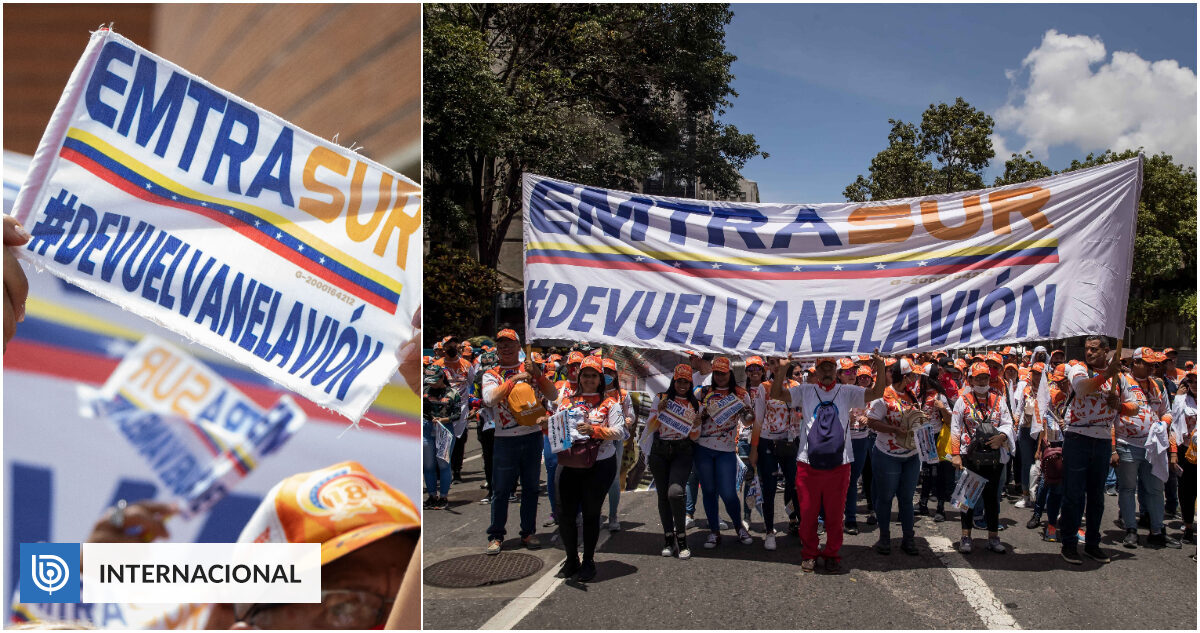 A delegation from the National Assembly (AN, Parliament) of Venezuela delivered this Thursday to the Argentine embassy a document rejecting the “kidnapping” of the Venezuelan-Iranian plane held in that country.

A Venezuelan government commission protested this Thursday before the Argentine embassy in Caracas the retention of a cargo plane in Buenos Aires and part of his crew.

The Minister of Transport, Ramon Velasquez, and pro-government deputies in Parliament were received by the ambassador Oscar Laborde.

Documents were delivered to this authority protesting the retention in June of a Boeing 747 de Emtrasur, target of sanctions in the United States.

“Return the plane and the crew!” Some 35 Conviasa workers, uniformed with company T-shirts and caps, shouted outside the diplomatic delegation.

“We gave the ambassador some communications so that the authorities, the counterparts in Argentina, sit down to talk. What is the situation, find the best alternative and the best solution to this problem”, said Velásquez at the end of the meeting.

“We hope that the truth prevails, that the Argentine justice system reacts, does not take this situation plagued by illegality to other levels so that our crew and our plane are back.”

The 747 entered Argentina on June 6th with a load of auto parts from Mexico.

Without being able to refuel in Buenos Aires, in compliance with the sanctions, left on June 8 for Montevideo.

Despite this, the Uruguayan authorities denied their access and had to return to the Ezeiza airport, where his retention was later ordered by order of a judge.

The justice opened an investigation against the crew, made up of 14 Venezuelans and five Iranians.

Last week, the judge handling the case allowed 12 of the crew members to leave Argentina, although that decision is being appealed.

Velásquez mentioned that the crew members are investigated by “espionage and terrorism”. “They have not yet been called to testify, their legitimate defense is being violated.”

My total support for the agreement approved in the AN in repudiation of the intention of the US to illegally seize the Venezuelan plane hijacked in Argentina. We will not rest until we recover what belongs to us. Venezuela is respected! We are united against injustice. pic.twitter.com/G1SqOSvhKJ

The Paraguayan intelligence service had already linked one of the Iranian crew members to the Al Quds Force, Classified Iranian Revolutionary Guards elite group as a terrorist organization by the United States.

“Crawling with the empire”

Weeks later, a US court asked Argentina to seize the plane, arguing that “laws were broken” when it was sold by Iran, also a target of sanctions, to Venezuela.

The entrance of the United States to the case raised the tone of chavismo, with protest speeches and street demonstrations.

Pedro Carreno, pro-government deputy who was part of the delegation, said that the ambassador showed “greatest disposition” to collaborate.

The day before, in a Parliament session, Carreño attacked the “a creeping attitude with an American impression” of the Argentine president Albert Fernandez.

“It is not a problem of justice but a political problem because they want to continue criminalizing this country,” he concluded.