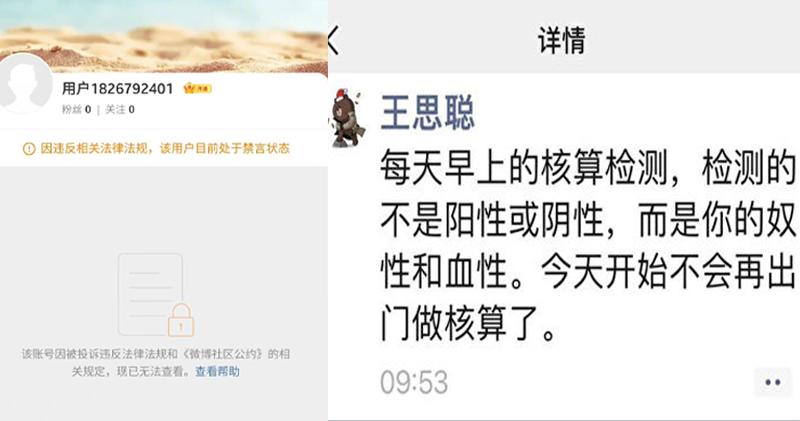 After the account of Wang Sicong, the only son of Wanda Group Chairman Wang Jianlin, was blocked, it was reported on the mainland that he was arrested by Shanghai police on suspicion of picking quarrels and provoking trouble, but no official confirmation has been obtained.

Wang Sicong, the only son of Wang Jianlin, chairman of Wanda Group, has always stood out in words and deeds. Following an earlier post on Weibo asking the China Securities Regulatory Commission to strictly investigate Yiling Pharmaceutical (002603.SZ), the manufacturer of Lianhua Qingwen Capsules, Wang Sicong posted another post to challenge China’s epidemic prevention policy, “Accounting (acid) detection every morning. , the test is not positive or negative, but your servility and blood. Starting today, I will not go out to do accounting (acid).” It is suspected that his speech touched the nerves of the Chinese official, and his Weibo account has been blocked.

According to Wang Sicong’s Weibo account, “This account is now unavailable due to complaints of violating laws and regulations and the relevant provisions of the “Weibo Community Convention”. The Weibo account with more than 40 million followers has been “cleared” and the content of Weibo All were deleted, Wang Sicong’s account could no longer be searched on Weibo, and his WeChat account was also blocked.

Previously,Wang SicongA message about Lianhua Qingwen Capsule was forwarded on Weibo, with words such as “The Securities Regulatory Commission should strictly investigate Yiling Pharmaceutical”, although the post was later revised, the original remarks were deleted, and it was changed to “Forwarding Weibo Bo”, but its post has aroused heated discussions among a large number of mainland netizens, and the share price of Yiling Pharmaceutical (002603.SZ) has also dropped by the limit. After that, Wang Sicong’s Weibo was banned for a while.

The research and development process of Lianhua Qingwen is only 15 days?Yiling Pharmaceutical: Media reports do not match the facts

Yiling Pharmaceutical, the manufacturer of Lianhua Qingwen Capsules, is suspected of being affected by Wang Sicong’s Weibo comments

The Hong Kong dollar interest rate has been developed individually for 1 month, and HIBOR has terminated 5 consecutive rises.

Apple launches self-service repair service in the US

Judge rules Musk did not commit wrongdoing in SolarCity deal

Some European companies ready to pay Russian gas in rubles

The three major indexes of Shanghai and Shenzhen opened at a low level, and the People’s Bank of China has zero investment and zero return.

The first wave of NVIDIA RTX 40 series product lineup has been revealed on the Internet, and there are rumors that there is also a 900W TGP BFGPU that has not yet been commercialized. #RTX 4090 (176472)