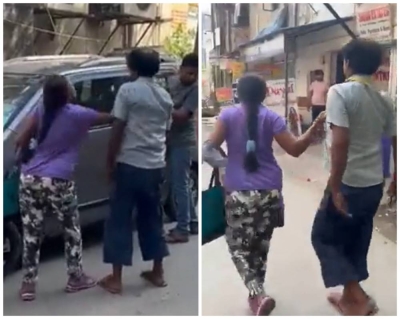 Al-Marsad newspaper: A video clip showed a violent reaction of an Indian woman who slapped a tuk-tuk driver 17 slaps in just 90 seconds.

This came after the owner of the tuk-tuk hit the woman’s car door with a slight shock, so she got angry and pulled him with his clothes back and forth, in Uttar Pradesh, India.

And whenever he wanted to speak to defend himself, she slapped him to shut up.

17 slaps in 90 seconds when the car is touched

A woman beat up the driver fiercely in the market after the car was touched by an e-rickshaw. The case is of Noida. pic.twitter.com/TGe6RXUDbT

Crazy time management! The man cheated 620,000 in 4 years of dating with the aunt “to steal her son again” | International | Sanli News Network SETN.COM