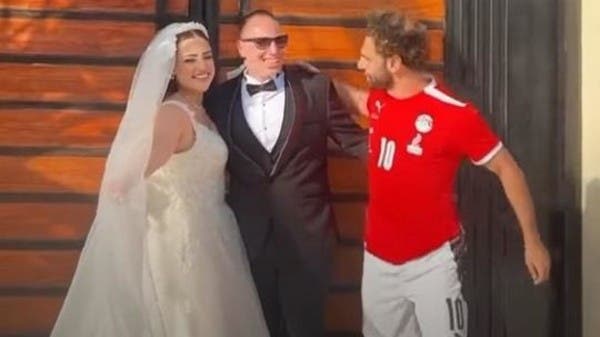 The Egyptian star, Mohamed Salah, a professional in the ranks of Liverpool FC, surprised two newlyweds during their wedding photo session on Thursday evening at the residence of the Egyptian team’s hotel in the city of Burj Al Arab, west of Alexandria.

Salah entered the photo session of the newlyweds, took a special picture with them, then ran, laughing, to join the gathering place of his colleagues in the Egyptian team.

Mohamed Salah appeared in a video clip, taken by one of the participants in the wedding photo session, when he entered the place where the newlyweds were photographed to share their joy and take souvenir photos with them.

Mohamed Salah joked with the groom before leaving the place, saying, “I’m leaving now,” in reference to the memorial photo, and then left running to catch up with his colleagues at their residence.

It is noteworthy that the Egyptian national football team concluded its preparations with the participation of 27 players present in the team’s camp, to face the Niger national football team, which is scheduled to start at eight o’clock this evening, Friday, at the Alexandria International Stadium.

Salah had missed the last two matches of the “Pharaohs”, the results of which were the reason for the dismissal of national coach Ihab Galal, after losing to Ethiopia 0-2 in the second round of Group D in the 2023 African Nations Qualifiers, and against South Korea 1-4 in a friendly.

It is noteworthy that the Egyptian national team is preparing for the qualifiers for the African Nations Cup in Cote d’Ivoire next year, and the “Pharaohs” are currently ranked fourth in Group D with three points on goal difference, behind leaders Ethiopia, second Malawi and third Guinea.

PR or hypocrisy? Kurkova turned out to be a good friend only in words

Shohei Otani, the difference from last season in the MVP battle The judge is a rival of a different dimension from Guerrero Jr. | Full-Count