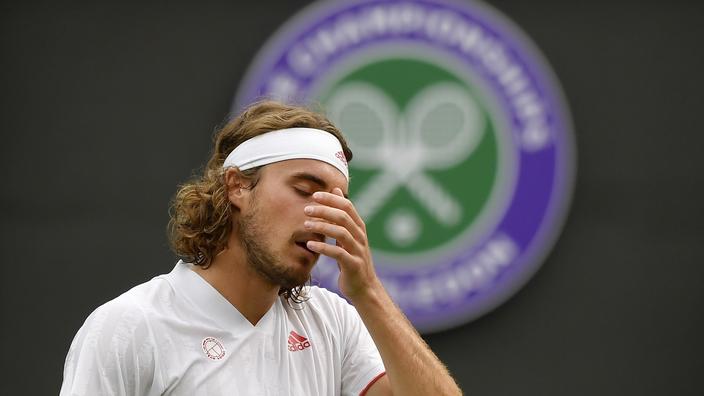 While the rain greatly disrupted the first day in London, Stefanos Tsitsipas, Roland-Garros finalist is already leaving the tournament and the two-time defending champion Novak Djokovic has given up a set.

Stefanos Tsitsipas, his nose already in the grass. How could we fear for the Greek, the final lost to Djokovic at Roland Garros, a fortnight ago, has not been digested. An excellent Frances Tiafoé, 57th in the world, very offensive and without complex, was stronger than his opponent dominated 6-4, 6-3, 6-3 after barely two hours of play. had not played on grass before Wimbledon, is currently allergic to London grass. This is the second consecutive elimination for him in the first round at the All England Club, his third in four appearances.

This is the fourth time in a row that the Roland-Garros finalist has been released in the first round at Church Road after Wawrinka (2016) and Thiem (2018, 2019).

Due to a persistent British drizzle, the programming of this first day was turned upside down with more than five hours delay for the courts without a roof (all except Center Court and 1). The meetings scheduled for 11 am (12 noon in France) started at only… 4.30 pm. Consequence: 16 matches have already been canceled and therefore postponed to the next day (Tuesday).

Double Wimbledon champion Petra Kvitova (2011 and 2014) is already saying goodbye to the tournament. The Czech, seeded 10, suffered the law of American Sloane Stephens 6-3 6-4. The winner of the 2017 US Open, down to 73rd place, offers herself a prestigious victory.

Evolving on court 1, protected by a roof, the Belarusian Aryna Sabalenka, 4th in the world, quietly won this Monday against the Romanian Monica Niculescu 6-1, 6-4, becoming the first qualified for the second round. Sabalenka, who has never yet reached the 3rd round on London turf, is one of the main outsiders of the London Grand Slam.

19-year-old Briton Jack Draper (253rd) can boast of having taken a set from world number one Novak Djokovic. A feat. The world number one hadn’t lost a first round in a Grand Slam first round match since he met Olivier Rochus at Wimbledon in 2010! Winner a fortnight ago at Roland Garros against Stefanos Tsitsipas in the final, the Serbian big favorite of the 2021 tournament, was cold picked before going 4-6, 6-1, 6-2, 6-2.

Novak Djokovic, struggling with his support early in the match, fell twice. The world number one preferred to smile. “I don’t remember having fallen so often on this court. I’m going to work on my moves and maybe I’ll slide a little less too, it doesn’t seem to work so well on grass ”.

The French Fiona Ferro was humiliated 6-0, 6-1 in 49 minutes by the Spaniard Garbine Muguruza, seed 11. The French in particular scored only eight points in the first eight games of the meeting against the winner of the 2017 edition! Ferro, who played for the second time in his career the main draw of the Major on grass, will not see the second round as in 2019.

After four years of absence, Andy Murray, twice winner (2013 and 2016) and once finalist (2012), opposed on the Center Court to Nikoloz Basilashvili, has returned to Wimbledon. Much to the delight of the London public.

After a 2020 edition canceled due to Covid-19, tennis has come back to life in the Temple of Tennis. British researcher Sarah Gilbert, seated in the royal box, received a standing ovation on Center Court. She was the one who designed the Oxford Astra-Zeneca vaccine.