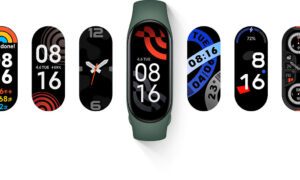 Xiaomi has officially unveiled its new generation of smart sports bracelet, Xiaomi Mi Band 7, which comes with improvements on the screen and sports programs in order to embark on a new journey of success as in previous generations.

Xiaomi held an event in China to unveil new devices, with the biggest focus on the Redmi Note 11T Pro, but the company also launched wireless headphones in addition to the Mi Band 7.

Xiaomi started talking about the new bracelet by emphasizing the great popularity it enjoys in the world, as the company has achieved sales of 140 million units around the world since the beginning of the launch of the first generation, and therefore there is interest in the new generation Mi Band 7 and the addition of improvements.

Mi Band 7 comes with an AMOLED screen as in the previous generation, but with a larger size of 1.62 inches instead of 1.52 inches, which means displaying more content, so there is a change in the design and what can be displayed on the screen.

And the bracelet displays a design to improve the viewing experience and data display, and Xiaomi has also added more than 100 new monitor interfaces, some of which are specifically designed for fans of the always-on display feature to keep the power consumption from the battery minimal.

The company has added in the Mi Band 7, many sports programs up to 120 for beginners and professionals, including running, walking, swimming, cycling, skiing and more.

In addition, thanks to the sensors, private training sessions can be analyzed through statistical analysis of your heart rate to provide recommendations on your workout.

The company also says blood oxygen monitoring and tracking has been improved, with the new model now able to continuously track SpO2 levels throughout the day, with vibration alerts and reminding the user when the blood oxygen level falls below 90%.

The bracelet and the smart watch will come with a magnetic charger, and Xiaomi promises a battery life of up to 15 days with moderate use, and up to 9 days of heavy use.

The bracelet will be available in multiple colors, black, orange, green, blue and white, and pre-order starts in China from today, at an official price of approximately $ 36 only, to reach the rest of the world soon.

Young stabbed in Montpellier: the suspect was immediately arrested and placed in police custody