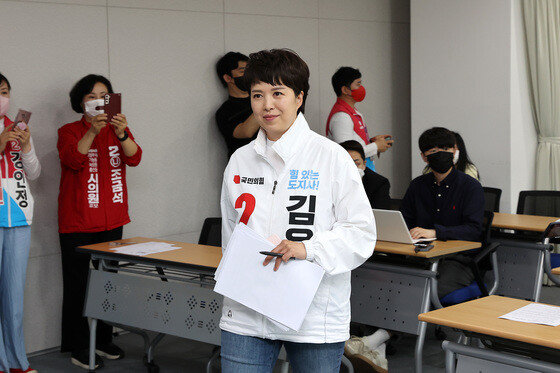 On the 23rd, Kim Eun-hye, a candidate for the People’s Power Gyeonggi Governor, blew a blunt in response to the defamation complaint against Rep. Yoon Mi-hyang, saying, “Look at yourself why Rep. Yoon Mi-hyang is being criticized by the people.”

Candidate Kim said on his SNS on the same day, “Isn’t the nickname of the law on strengthening the management and supervision of civic groups the ‘Yoon Mi-hyang Prevention Act’?”

In a discussion held in Jung-gu, Seoul on the 16th, Candidate Eun-hye Kim made a remark when asked about her opinion on the abolition of the Ministry of Gender Equality and Family, saying, “I did not do my part in the pursuit of personal interests of Rep. Yoon Mi-hyang using the comfort women.”

On the 23rd, independent lawmaker Yoon Mi-hyang filed a complaint against Gyeonggi Governor Kim Eun-hye on charges of defamation. The photo is the receipt of the complaint. (Provided by Rep. Yoon Mi-hyang) © News1

It is known that Rep. Yoon Mi-hyang filed a complaint against the lawmaker for defamation.

Candidate Kim said, “Since the so-called Jeongui-yeon incident in May 2020, the misconduct of Rep. Yoon Mi-hyang has been reported through numerous media articles. Do you mean that the investigative agency systematically spread false information for two years and prosecuted an innocent person?” he asked.

In March of this year, Song Young-gil, chairman of the Democratic Party of Korea, publicly discussed the expulsion of Rep. Yoon Mi-hyang.

“Now, Rep. Yoon Mi-hyang has become a symbol of corruption in civic groups. In a nutshell, is the ‘Yoon Mi-hyang Prevention Act’ an alias for the law on strengthening the management and supervision of civic groups?”

Lee Seung-eun, deputy spokesperson for Kim’s side, also raised a voice saying, “Rep. Yoon Mi-hyang, who has no shame, should resign immediately.”

Deputy Spokesperson Lee said, “Is there anything wrong with Kim Eun-hye’s remarks during the debate?” He added, “Reflection and apology, despite the fact that the public is using a penny or two to relieve the pain of the comfort women as if it were a personal savings account. And instead of resigning from his office, do you want to claim his innocence by unconditionally accusing him?”

“Is the past two years not enough time to realize that you cannot cover the sky with your palm?” said deputy spokesperson Lee.

Meanwhile, Rep. Yoon’s side said, “The indiscriminate allegations raised against Rep. Yoon over the past two years have been proven to be false. It is being revealed through this media.”

“Candidate Eun-hye Kim is a journalist and a former member of the National Assembly, and she is in a position where she cannot be ignorant of this. ” he asserted.

After Biden’s fiery statements… a firm Chinese response on Taiwan

From monkeypox to Zika: These zoonoses have occurred so far