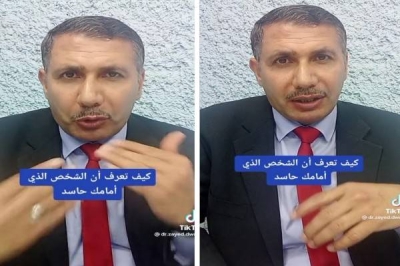 Al-Marsad newspaper: The Jordanian Islamic researcher, Zayed Al-Duwairi, answered a question that says, “How do you know that the person in front of you is envious?”

1- The first mark: Frequent inquiries and questions about private matters, and accurate details related to the wife, money and salary.

2- The second sign: completion and amazement when he hears about a blessing that befalls a person, such as buying a new car or a villa.

3- The third sign: the eyes are narrowed when a blessing is mentioned in front of him, so he looks to the right and to the left with different looks from the natural one.

4- The fourth sign: As soon as the envious person enters your house, the situation suddenly changes, problems may occur with the wife or assault on one of the children.

5- The fifth sign: the occurrence of involuntary movements of the envious person when he hears a blessing that befalls another, such as itching or pressure on the jaws.

6- The sixth sign: the envious person winks at the person who was poor and then became rich.

7- The last sign: The envious person does not use immunization when mentioning the blessing in front of him, such as “God willing, there is no might or power except with God, O God, bless the Prophet.”

The incidence of impotence was 36.1% associated with diabetes group – Yespick – Hot News YesNews

The typhoon signal No. 8 puts the dog outside for the wind and the rain. It is known that the dog owner said, “The paparazzi likes to go out and play in the water”