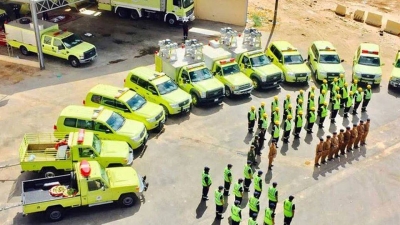 Al-Marsad Newspaper: The Civil Defense called on everyone to exercise caution and caution due to the possibility of thunderstorms in parts of the Kingdom’s regions, starting from tomorrow, Monday, until next Wednesday.

And the Civil Defense said, through its Twitter account, that the regions of Makkah Al-Mukarramah, Al-Madinah Al-Munawwarah, the northern borders, Tabuk, Al-Jawf and Hail will be affected by moderate to heavy rains and brisk winds, which may lead to floods.

According to the statement, the eastern region and Al-Qassim will be affected by moderate rains in their entirety, and it is not excluded that rainy thunderclouds accompanied by active winds will form during the same period in parts of the regions of Makkah Al-Mukarramah, Riyadh, Asir, Jazan and Al-Baha.

The Civil Defense called on everyone to be careful and wary of potential dangers in such an atmosphere, and to stay away from the places where the torrents gather.

20 people were transferred from a nursing home to a hospital… What is the reason?