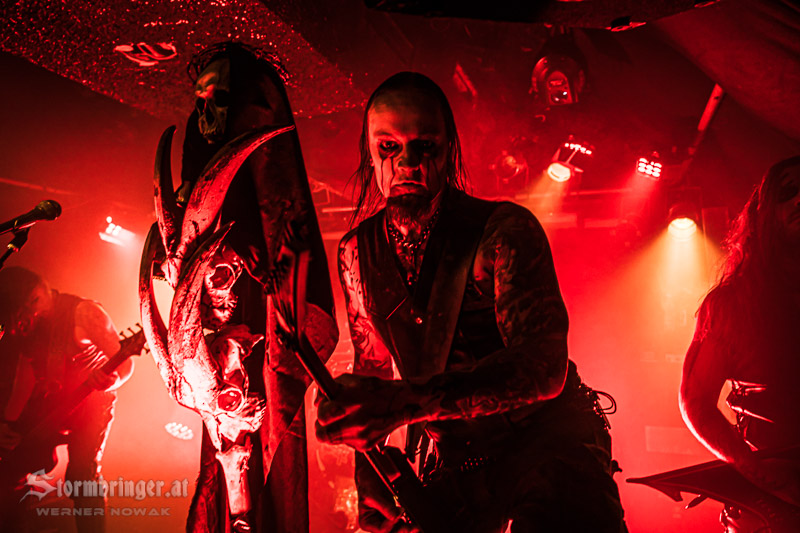 Certainly the most varied and dynamic song stock we have ever recorded. Amen!

The 12th studio album of the local black metal veterans BELPHEGOR was released on July 29th, 2022, just in time for the 30th band anniversary. On this occasion I spoke to Helmuth about the new album, goals and inspiration!

Just in time for the (slightly delayed) release of the long-awaited 12th studio album by the Austrian black metal legends BELPHEGOR, I was able to put Helmuth to the test in an interview. We talked about motivation, inspiration, the new album, past and future, among other things, but read for yourself:

29 years of BELPHEGOR, 12 albums to be released soon, countless tours all over the world – that is – not only for an Austrian Black Metal band – a remarkable result. Where do you get the energy and, after so much experience, the motivation to keep going? How do you manage not to let being a musician become a routine job and keep your passion alive?

BELPHEGOR play brutal Metal of Death with Black Metal influences. A perfect symbiosis of both style elements, that’s our trademark sound since 1993 and we were one of the first bands to create what we now call Blackended Death Metal sound.

As always, on our twelfth work “The Devils” we glorify the abysses of the human race in close connection with romantic perversion, nihilistic views and the main theme the devil, i.e. the rebellious fallen angels who have thrown themselves onto earth.

Me and Serpenth embody BELPHEGOR. We’ve been a two-man squadron since 2006. We change studios, producers for almost every album and recruit new flesh every few years in the form of talented musicians from all parts of the world. This keeps the fire and the passion to create brute art alive & enables us to invade worldwide. BELPHEGOR stand for extreme music paired with blatant live processions.

A lot of time has passed since the last album. Well, after five years of waiting, a new one appears with “The Devils”. What you can already hear sounds very promising! Stylistically it seems to me that a lot has changed compared to the last album. “Totentanz -​ Dance Macabre” reminds me of “Lucifer Incestus” times. A really strong number with a lot of complexity and killer drums! In your opinion, is it already a signpost for the new album?

The pandemic has of course delayed the whole thing enormously. “The Devils” was planned for early 2021, now the LP will finally come out on July 29, 2022. On the one hand it was frustrating not being able to tour and come up with all the theater the last few years worldwide. On the other hand, we had a lot of extra time, contempt and pent-up aggression because of it, all of which flowed into the new work.

The now more than worn-out Covid drama was certainly to blame for the fact that everything took so long. I didn’t want to put out an LP if we couldn’t promote the album, on stage where the BELPHEGOR essence takes place, so in a live procession. I don’t compare albums, each project stands on its own. And yes, of course we try to constantly develop and get the most out of it. Most of the time we succeed, sometimes we fail.

Thank you. Yes, “Totentanz” is the fastest sound collage we’ve ever created, far more intense than “Lucifer Incestus” and a challenge for any musician. The drums in particular, recorded by David Diepold, are incredibly complex. But yes, both dynamic aggressive tracks. “The Devils” is our most varied album in BELPHEGOR’s legacy. We covered everything in the extreme metal area, just our trademark sound with some NWOBHM influences in the BELPHEGOR guise and dared many new experiments, such as in “Glorification of the Devil” or “Creature of Fire”. Jens Bogren, the exceptional Swedish producer, has forged us a crass and brilliant sound wall, straight from hell.

Another trademark since 1996 is the German language, which we incorporated for the first time and have paid homage to it on every album since then. In addition to German and English, we also use many original quotations, namely prayers, heresies, spells in the form of Latin fragments.

Everything on “The Devils” sounds exactly how we wanted it to in 2022. One of our strongest albums for me, that’s for sure. Certainly the most varied and dynamic song stock we have ever recorded. Amen!

The second pre-release, “Virtus Asinaria – Prayer” seems unusually hymnic, mystical, sublime. In addition, the coherent live video from the Neudegg-Alm. What inspired you for this title?

A Latin prayer for the glorification and homage of the devil, my blood brother Barth brought that back when he was still playing bass in BELPHEGOR.

In my opinion, the final work “Virtus Asinaria – Prayer” has become something very special. We have been celebrating the songs on stages worldwide since the beginning of 2019. The march-like drumbeat, the atmospheric guitars, the monotonous monks’ singing are something we’ve never had before and are now a highlight in every BELPHEGOR procession.

On “The Devils” we experimented more than ever, also the track “Creature of Fire”, with female chants I want to mention here, provided with deep drums. I sang all the choirs too, in the four or five songs. We’ve never had polyphonic choirs, but Jakob from the Mischmaschine studio, where we recorded bass, guitars and vocals, sang in the church choir as a child and said: “Let’s try something like that”. It was a glorious idea and brought a lot to the new album in terms of timbre and majestic grandeur.

We had never performed such a piece of music and we are moving into completely new territory, where we also added clean female ritual vocals.

A lot has changed in the music industry since the band was founded in 1992. Away from the CD, towards streaming, and now in recent years away from digital media towards analogue sound carriers such as records or tapes. How did you experience this development as a musician over the years? Your new album will be released on vinyl as well as CD. Do you have a favorite sound carrier?

Art has to be controversial, taboo-breaking and bizarre, if it’s not it’s just rubbish to me. But like I said, to each his own. A lot of things are becoming more and more sensitive and we live in this cancellation culture, which is appalling. Art needs the freedom of language, everything is curtailed and maliciously censored as soon as one does not conform with the wasting masses, the terror-consumption society.

We’ve only got problems, and companies like You Tube are killing art with their circulations by cutting everything.

I don’t care much about the industry either, nor do I want to talk big about it, every generation has its thing and that’s a good thing. I keep it like always, I support, listen to what I like and ignore the rest.

Are there any plans for the future? Do you have goals as a band?

Yes, of course we will celebrate the album “The Devils” in as many halls as possible worldwide.

Whether as a person, band, musician, artist, whatever. The most important things are goals, visions and taking the liberty to work on them, if possible to bring them to life. We are very proud of what we have achieved with BELPHEGOR without big agencies and worthless attention-getting.

And yes, we still have some missions and paths to go that we will work hard on as a team in the future. Life is too short to play games. Don’t let anyone talk you into it, go your own way and make your “own” decisions, it’s your life.

As of today, how many albums do you still want?

As I said, touring has priority in the BELPHEGOR camp, and then we’ll see.

A BELPHEGOR concert is a purifying, bizarre procession where you take your demons out to dance. Devilishly frenzied, authentic and sublimely presented. No matter where we invade, the main plan is always to smash everything to rubble musically.

Many thanks for the interview! Do you want to get rid of something else?

Metallic greetings to all the people who support us and visit our concerts and buy our merch or albums. An honor – this horror. In music, Helmuth