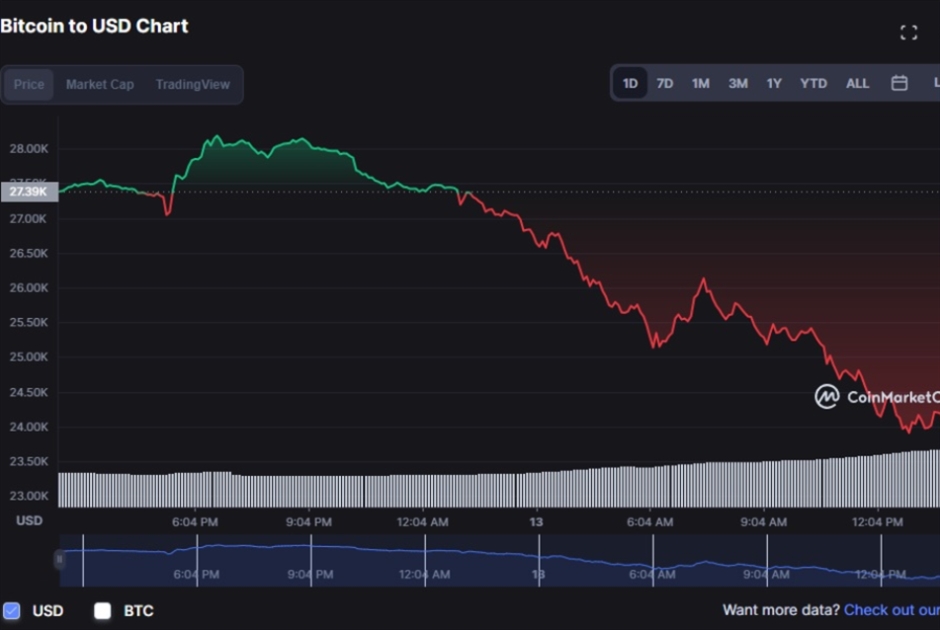 The “Bitcoin” currency fell to its lowest level in 18 months, today, below 25 thousand dollars, due to investors avoiding risky assets in light of the nervous global markets.

At a time when stock markets around the world fell as investors flocked to the dollar as a safe haven, Jeffrey Haley, an analyst at Oanda Corporation, said that “the most severe deterioration is likely to occur in the cryptocurrency world.”

The most famous digital currency fell by about 10% at around 0840 GMT, to $ 24,580, which is a decrease of more than 65% compared to the highest levels recorded by “Bitcoin” in November 2021, and its lowest levels in December 2020. When writing this report, it reached The price of the coin reached 23,645 dollars.

While the cryptocurrency market was worth more than $3 trillion at its peak seven months ago, it is close to $1 trillion, according to Coingecko, which tracks more than 13,000 different cryptocurrencies.

In 2021, this still nascent sector has attracted a growing number of traditional financial investors whose appetite for risk has been opened up by the ultra-loose policies of central banks around the world.

But the increase in the interest rate on the dollar, which was decided by the US Federal Reserve to stop hyperinflation, is weighing on the markets.

In addition, the decline of the “Bitcoin” currency accelerated after “Celsius suspended withdrawals,” according to Mark Heffley, an analyst at UBS.

In October, Celsius raised $400 million from the Quebec Deposit Fund, which expressed its satisfaction with the partnership with “the world’s leading provider of cryptocurrency loans.”

Today, the platform announced that “due to the harsh market conditions, we are suspending all withdrawals and transfers between accounts.”

“There is a deterioration in the cryptocurrency space and it is likely to get worse,” said Neil Wilson, an analyst at Markets.com.

In early May, the terra cryptocurrency, whose price is supposed to be pegged to the dollar, collapsed, raising investor fears.

Henryk M. Broder on Ukraine: The short half-life of our empathy