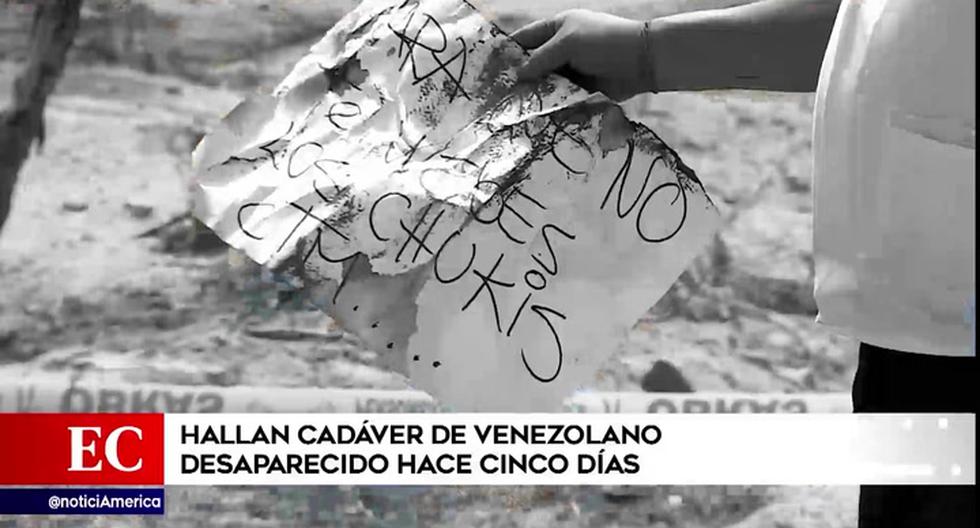 A criminal gang murdered and abandoned the body of a man of foreign nationality who had been missing for five days, in Cieneguilla. The executioners left a poster next to the body with a threatening message.

It was reported that it was the staff of the Serenazgo de Cieneguilla who found the body in an advanced state of decomposition and under the sun, in the serpentine of said place.

This had been placed on the side of the road and covered with a green cloth, in addition, the murderers left a poster next to the victim. This one said: “So you don’t get involved, Los Chukis”.

Minutes later, the National Police and the Prosecutor’s Office arrived to remove the body.

Then, a woman and two men of Venezuelan nationality appeared at the scene, who confirmed that it was the foreigner Anthony Josué Prado Hernández.

Police information detailed that “Los Chukis” would be a criminal gang dedicated to land trafficking in Manchay. The link that the murdered person could have had was not determined.

The tensions between Russia and Ukraine have set off alarms in numerous foreign ministries around the world, since there is open talk of the possibility of a war between these two countries. In this video we tell you the keys to understand this conflict.

War Russia and Ukraine: the reasons of the United States and NATO for not sending troops to Kiev | Joe Biden | Vladimir Putin | Donbas | Luhansk | Donetsk | WORLD

War in Ukraine: Roman Abramovich, the Russian owner of Chelsea, announces his withdrawal from the management of the club