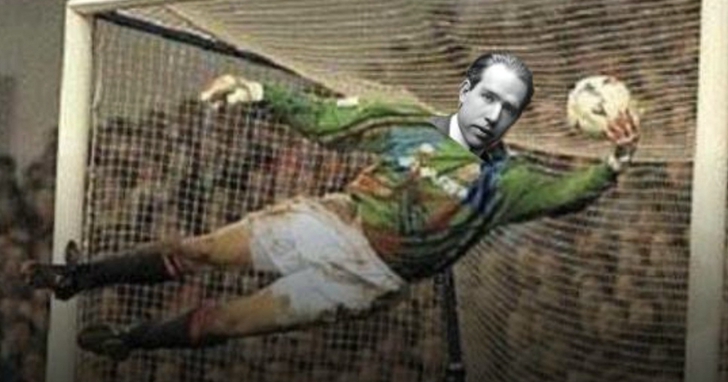 He missed a great save because of a math problem. Since then, there has been one less goalkeeper Bohr and one more scientist Bohr in the world.

He is the well-known founder of quantum mechanics Niels Henrik David Bohr (Niels Henrik David Bohr). Because of the research on atomic structure and quantum theory, he won the Nobel Prize in Physics and became famous all over the world. He is regarded as one of the greatest scientists of the 20th century.

But what most people don’t know is that he started playing football at the age of 14 and once became the main goalkeeper of AB, one of the strongest clubs in the country at that time.

In one game, he forgot to block a goal from a German club because he was doing math on the goalposts. Afterwards he admitted: doing the questions is more interesting than guarding the gate.

People familiar with the matter recalled that this is one of the reasons why he did not enter the international competition.

In fact, Bohr was born in a family with both science and sports. Father Christian Bohr is a professor of physiology at the University of Copenhagen, and at the same time he is very passionate about sports.

Football was still a novelty in Denmark at the time. Not only did my father help bring the sport to Copenhagen, but he also built a football stadium on the nearby Tagensvij street. Every time I go to play football, I bring Boll and his younger brother with me.

Football is also one of their subjects at school. According to the memories of his classmates at the time, every time he played football, Bohr would “punch hard” and hit the ball into the ditch.

It is precisely because of this that the teacher discovered his talent as a goalkeeper. 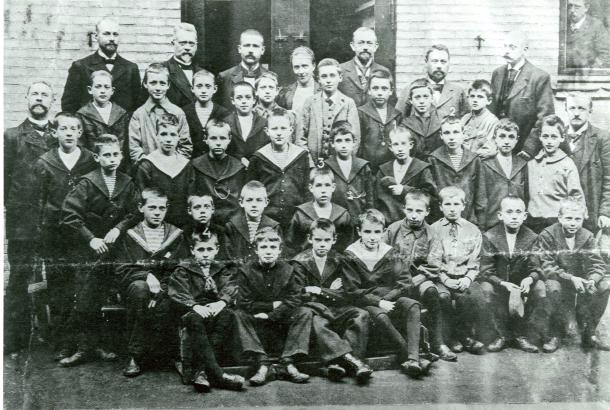 At the age of 14 or 15 (1899), he was selected into the junior division of the AB Club (Akademisk Boldklub) together with his younger brother, and then entered the first echelon, and became the main player of the club within a year.

I thought that he would go further and further in the football world step by step, but there was an episode in the middle. According to people familiar with the matter later recalled, this was one of the reasons why he bid farewell to football.

Against Germany’s Mittweida Tecnicum, because the ball rarely landed in the AB’s goal, Bohr simply leaned on one of the goalposts to solve the math problem.

As a result, when the opponent made a long shot, Bohr was scored and lost a point without paying attention.

After the game, he admitted to his teammates that the questions he was thinking about were more interesting than the game, so he quit the sport after the 1905 season.

In comparison, his younger brother, Harald Bohr, who is two years younger than him, is much more talented and has gone further in his football career.

At the age of 16, Harald Bohr made his debut in the first echelon of AB, and was called “the first ball dribbler in Danish football”. Before a game, he would always hold a white handkerchief in the air to measure the direction and strength of the wind.

He later entered the national team as captain and participated in four international competitions, including the London Olympics in 1908, where he won a silver medal and scored twice in the final. 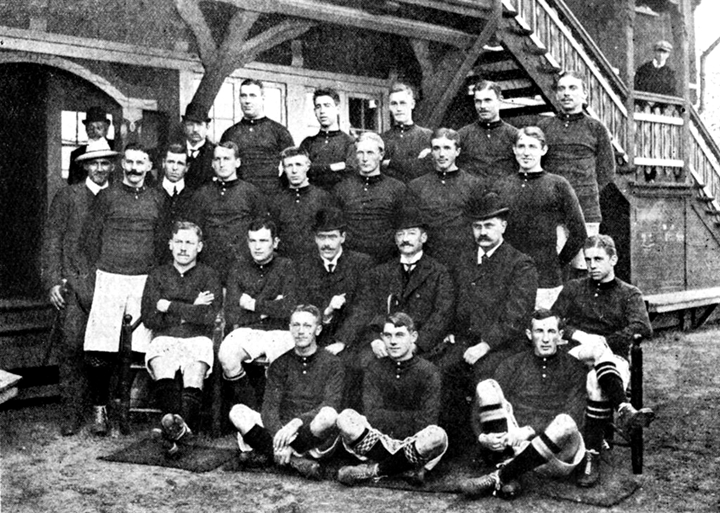 But it didn’t take long for him to continue his studies and specialize in mathematics, which also gave birth to the theorem named after him-the Bohr-Mollerup theorem.

Many people confused the two at the time. There are even rumors in the world that when Bohr, who was a professor at the University of Copenhagen at the time, met the King of Denmark, the king called him a famous football player as soon as they met. As a result, Bohr quickly denied it: You are talking about my brother, right? 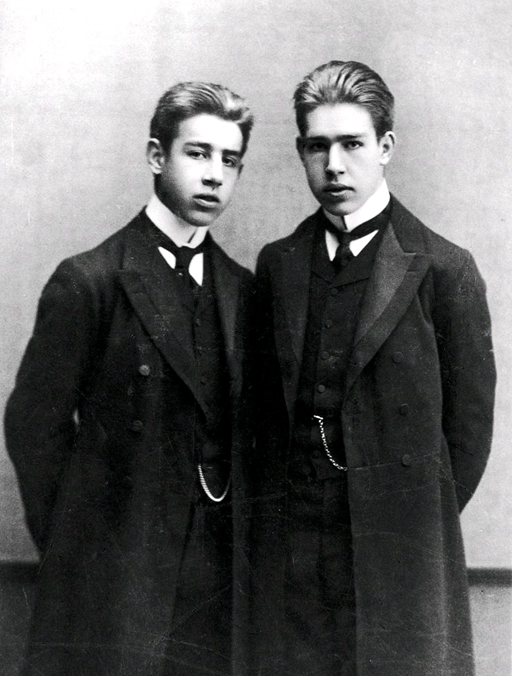 In that era of amateur football, most players had day jobs, but the combination of intelligence and athleticism of the Bohr brothers was rare. This is also the reason why they were so popular in China at that time.

Leaving football aside, the younger brother Bohr was actually better than his elder brother when he was young, and he even helped him revise his doctoral thesis in physics. You must know that they are two years apart, but they entered the University of Copenhagen at the same time, and the younger brother got the master’s degree earlier than the elder brother, and completed the doctorate degree in one year. Compared with his younger brother who has achieved little, Bohr seems to be “a bit slower”, and he only emerged a little in college.

This may also be related to his personality. He is not very good at talking and has an introverted personality; while his younger brother is more eloquent and popular with his classmates. All this turning point began when Bole Rutherford met him.

Founder of the Copenhagen School

Bohr went from university to Ph.D. at the University of Copenhagen. At that time, his doctoral dissertation “Electronic Theory of Metals” had a certain breakthrough, but because it was written in Danish, it did not receive much attention outside of Northern Europe. So he came to England, hoping to be appreciated by the Nobel Prize winner Joseph Thomson.

But he was too straightforward, and he put the two papers in front of the professor without saying anything. One was for himself, wanting his guidance; the other was for Thomson, wanting to point out his mistakes to his face.

As a result, Rutherford, Thomson’s former student, happened to come to Cambridge to give a report, so Thomson followed suit and introduced Bohr to Rutherford.

Rutherford, the father of nuclear physics, created the Rutherford model, which successfully proved that there is an atomic nucleus in the center of the atom. 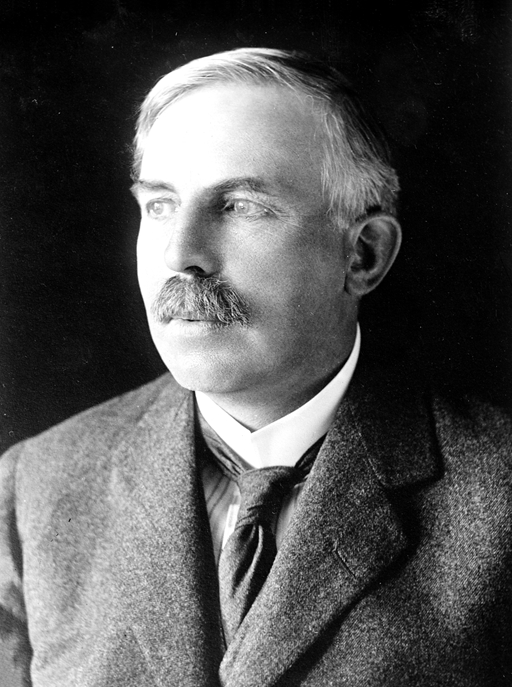 It is precisely because of this opportunity that their close relationship as teachers and friends has been achieved for many years.

On the basis of Rutherford’s research, Bohr constructed the breakthrough Bohr model by citing the quantum theory proposed by Max Planck. In this epoch-making long paper – “On the Structure of Atoms and Molecules”, Bohr proposed quantum discontinuity, which successfully explained the structure and properties of hydrogen atoms and hydrogen-like atoms.

The Bohr model introduced the concept of quantization for the first time to study the movement of electrons in atoms, and successfully clarified the mechanism of atomic light emission, which can be said to open the door to the microscopic world. 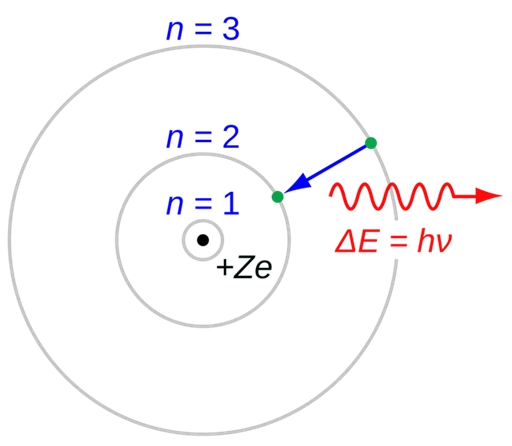 This achievement is also hailed as an important turning point or milestone in the development of modern atomic structure theory, for which Bohr himself won the 1922 Nobel Prize in Physics. Since then, Bohr, who became famous in World War I, has been hired as a lecturer and professor by Victoria University, University of Copenhagen and other institutions, and was elected as an academician of the Royal Danish Academy of Sciences in 1917.

The Institute of Theoretical Physics in Copenhagen (the Bohr Institute), which he himself worked on, was formally established in 1920, and soon attracted a group of physicists such as Heisenberg, Pauli, Landau, Zhou Peiyuan, and Herweg. defected.

Many of them were the later masters of quantum mechanics, who together solved many of the most profound problems in physics. This is the later “Copenhagen School”.

Until now, it is still the temple in the hearts of many physicists. 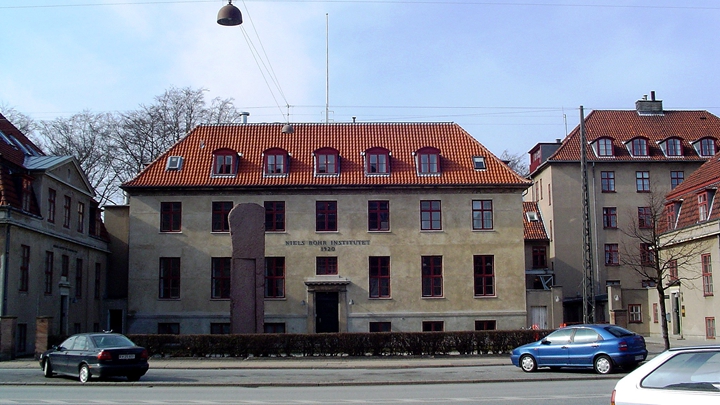 Fall in love with Einstein

Bohr’s theory has not been unquestioned, and this refers to his decades-long “tit for tat” with Einstein.

The two schools of thought have been arguing for as long as 30 years. 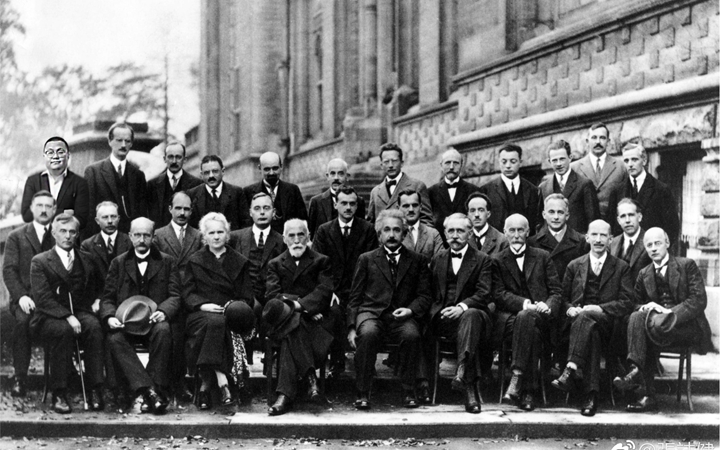 According to Heisenberg’s later recollection, during the Solvay meeting, Einstein often told Bohr and others at breakfast about the new thought experiments he thought up at night. And Bohr turned on the “goalkeeper” defensive mode and immediately began to analyze. On the way to the meeting room, he made a preliminary explanation on this issue, and discussed it in detail at the meeting.

It turned out that Bohr was always able to prove to Einstein at dinner time that his experiment could not refute the uncertainty relationship.

Einstein would come up with a new thought experiment the next day, more complicated than the previous one.

It goes on and on like this, and no one is convinced. 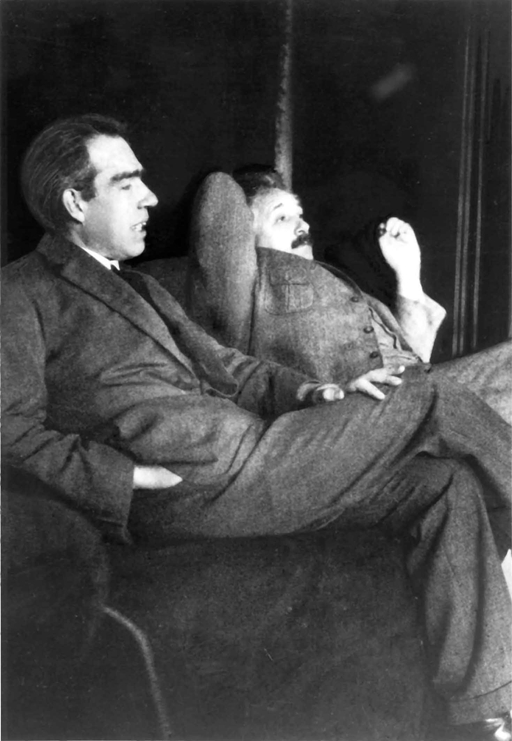 Since then, the two have also started an exchange of papers and papers, raising the debate to a new level. 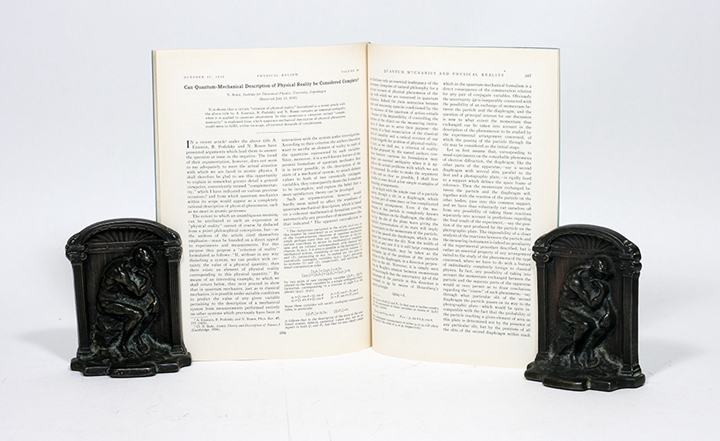 In their paper they proposed a necessary condition for theoretical completeness: every element of physical reality must have its counterpart in the physical theory. That is, we can predict the value of a physical quantity with certainty without disturbing a physical system. A thought experiment was also proposed, known in history as the “EPR Paradox”.

Five months later, in response, Bohr wrote a paper of the same name and published it in the same journal for defense.

On the grounds of the inseparability of measuring instruments and object reality, he negates the premise of the EPR argument—the epistemological criterion of physical reality, thereby negating the paradoxical nature of the EPR experiment.

However, just as the EPR argument was not accepted by Bohr, Bohr’s refutation could not convince Einstein either.

Since then, the dispute between the two has continued. 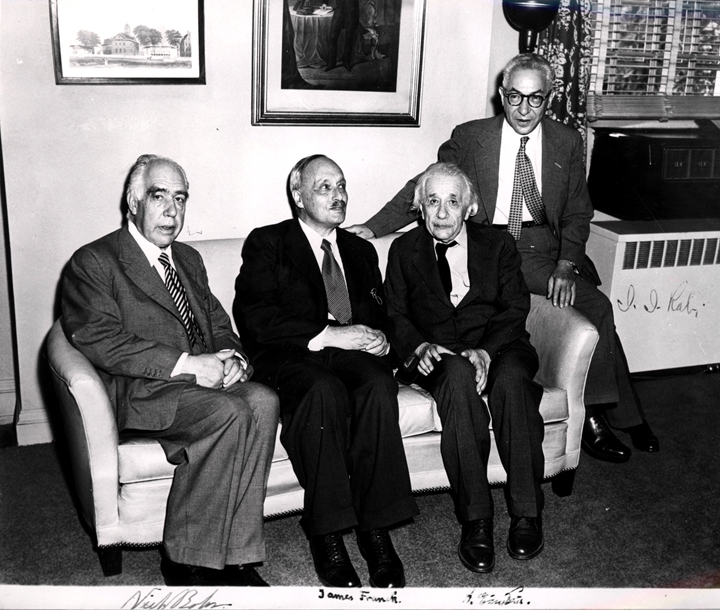 Until 1962, the day before Bohr’s death, he still drew a sketch of Einstein’s light box experiment on the blackboard and explained it to the interviewers who came. The last handwriting.

And this debate, which has lasted for more than ten years, has gradually become a good story in the history of science.

Science historian Max Yarmer once commented that this is a great debate in the history of physics, perhaps only the Newton-Leibniz debate in the early 18th century can be compared with it.

It is worth mentioning that Ball’s children also seem to have inherited Ball’s physical and athletic talents. 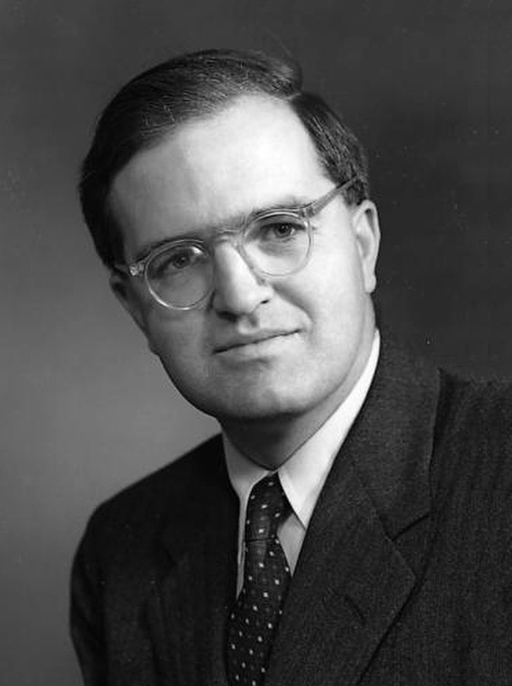 The other son, Ernes, is a lawyer and represented Denmark in the grass hockey competition of the 1948 London Olympics, fulfilling his father’s unrealized Olympic dream.

“Tak Bongkot” makes a beautiful comeback, spells “Mia Luang” in the 5G era, ready to be spicy on 14 Dec.