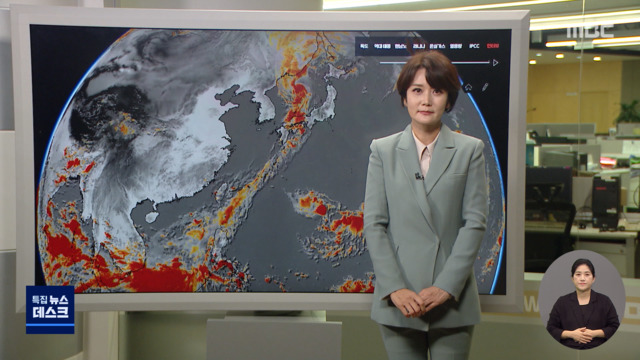 Hinnamno was recorded as the third strongest typhoon in history among typhoons that came to Korea.

There were not one or two strange things about this ‘Hin Nam-no’.

The location where it occurred was strange, the route was strange, and the intensity was also strange, such as getting stronger as you come to Korea.

Is this the last typhoon that breaks the common sense of typhoon?

Yes. This video was filmed on Dokdo this morning.

The wind and rain are blowing so hard that it’s hard to tell what’s ahead.

The rain and wind are so strong that it looks like a splash of water.

The video filmed on Dokdo is the last appearance of the typhoon, and it radiated powerful power until the last moment.

When the typhoon landed on Geoje Island, the central pressure of the typhoon was measured at 955 hPa, which was 1 hPa higher than that of Maemi.

The lower the pressure, the stronger the typhoon. This typhoon was recorded as the third strongest typhoon after Sara and Maemi.

The instantaneous maximum wind speed was 43.4 m/s, the maximum wave height was 20 m, and the hourly rainfall representing the intensity of heavy rain was 111 mm.

It was the first time since the meteorological observations began that heavy rain of more than 100 mm per hour fell in Pohang.

I think I should remember this typhoon well, but from its appearance to the north, there were not one or two strange things.

First, the typhoon is located north of 25 degrees north latitude, which is a very unusual super typhoon that occurred in the north.

Typhoons usually move northwest, but it was strange that they moved southwest.

Despite the fact that it was built by absorbing other low pressures in the middle, it was different from the typhoon formula in that it did not weaken as it moved north to the Korean Peninsula, but rather became stronger.

Several typhoon formulas were broken at once. There are many reasons, but the most important is the hot sea.

There are three main reasons for the high temperature in the western Pacific.

First, the La Niña phenomenon. This shows the recent water temperature in the Pacific Ocean, which is colder in the eastern Pacific.

This is the La Niña phenomenon, which has been unusually continuous for three years, pushing warm waters into the western Pacific Ocean.

In addition, the time when the sea water temperature is highest is from late August to early September, and finally, climate change.

Among them, climate change factors deserve the most attention.

The ocean has so far absorbed 90% of the heat from the greenhouse effect.

Like the guardian deity who protects the earth, the sea has endured, but even the seemingly expansive sea has its limits.

This is data released by NASA.

It represents the amount of heat absorbed by the sea over the past 60 years.

300 zeta joules, that is, the amount of energy equivalent to the detonation of 4.4 billion Hiroshima atomic bombs at once.

It can be said that the energy source of the typhoon has increased that much.

Look at the typhoon section of the recently released UN Climate Change Report.

As climate change progresses, it is predicted that the number of super typhoons such as Hinnamno will increase.

It is emphasized that there is a high possibility that the number of typhoons that develop strongly in the north beyond 30 degrees latitude is likely to increase.

Let’s listen to the words of Professor Dong-Hyun Cha, a typhoon expert at Ulsan Institute of Science and Technology.

“The seawater temperature rises more clearly around the high latitudes around Korea than at the low latitudes at the equator. So typhoons that occur at high latitudes like Hinnamno are the effects of climate change (think of it).”

This is how clouds develop in the Western Pacific.

Tropical cyclones are forming all over the ocean.

Tension cannot be relaxed as to which tropical cyclone develops into a typhoon and moves northward to the Korean Peninsula.

I think it’s time to look around and check whether we are well prepared for the increasingly dangerous sea and stronger typhoons.

So far, it has been delivered by the Disaster Broadcasting Center.