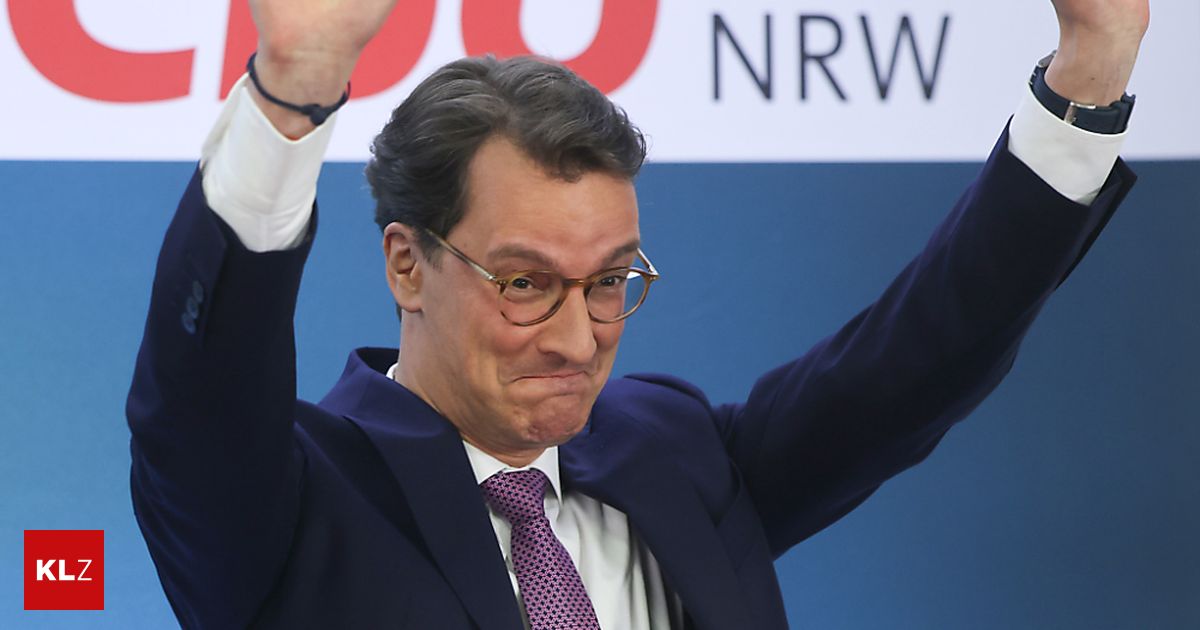 The CDU and Greens, who were the only ones who gained additional votes, could now strive for a black-green alliance, as is the case in Hesse and Baden-Württemberg, but in the south-west under the leadership of the Greens. “This is the task of forming and leading a future government,” said Wüst. “There are two winners tonight. These are the Greens and this is the CDU, my party.” The 46-year-old announced that he would speak to all factions except for the AfD.

Kuschaty, on the other hand, said about a possible traffic light alliance: “We will not close our minds to talks.” The victory of the CDU and the strong result of the Greens “does not automatically mean that a government will be formed between the two”. There are “quite other options conceivable”. SPD leader Lars Klingbeil emphasized that governments have often been formed from second place. The political director of the federal Greens, Emily Büning, said that she could imagine a coalition with the CDU as well as with the SPD and FDP.

According to an analysis by the Wahlen research group, the election was also a vote against a new edition of the black-yellow coalition. Above all, the voters wanted a red-green alliance.

For the FDP – government partner of the CDU in the state for five years and partner of the SPD and Greens in the federal government since autumn 2021 – it is a bitter defeat. In 2017, with today’s German Finance Minister Christian Lindner as the top candidate, she had become the third strongest force. On Sunday evening she even had to worry about entering the state parliament. Lindner spoke of a “disastrous defeat”.

With their strong result, the Greens are now the “kingmakers” in NRW. Her top candidate, Mona Neubaur, declared that her party wanted to have a say in governing in Düsseldorf and now “finally wanted to make politics up to date”. She called the record result a leap of faith, and the reason for this was also the tailwind from Berlin. The Green politicians in the federal government have shown “attitude and compass” in times of crisis.

The vote in the most populous federal state was considered a “small federal election” and an important mood test for German federal politics, Chancellor Olaf Scholz (SPD) and the new CDU opposition leader Friedrich Merz. 13 million citizens were eligible to vote, about a fifth of all eligible voters in Germany.

The result means tailwind not only for the Greens, but also for the CDU and party leader Merz. He tweeted in the evening: “The CDU is back, our forward-looking course has been confirmed.” For his CDU, it is the second success after the sweeping election victory in Schleswig-Holstein, which ended the series of defeats at federal level and in several states a week ago.

Wüst had only taken over the office of head of government in October 2021 from Armin Laschet, who had failed in the German federal election as the Union’s candidate for chancellor. Laschet subsequently resigned as CDU federal chairman. Merz also comes from NRW, he had actively supported Wüst in the election campaign. The 46-year-old libertine began his career as general secretary of the NRW-CDU, resigned in 2010 as a result of an affair and later became managing director of the North Rhine-Westphalian newspaper publishers’ association. In 2017 he became Minister of Transport under Laschet.

NRW has long ceased to be the “homeland” of social democracy. The CDU and SPD have alternated in government in recent electoral terms, and since 2005 no coalition government has lasted more than seven years. Today’s SPD party and faction leader, Kuchaty, was state justice minister in the red-green coalition until 2017. Under the leadership of the 53-year-old, whose level of awareness on the Rhine and Ruhr was rather low until recently, the SPD is now slipping below the result of 2017, which at 31.2 percent marked a historic low.

Health | The question: how to protect yourself from the tiger mosquito?

for François Bayrou, “Jean-Luc Mélenchon’s program would lead France into an abyss”