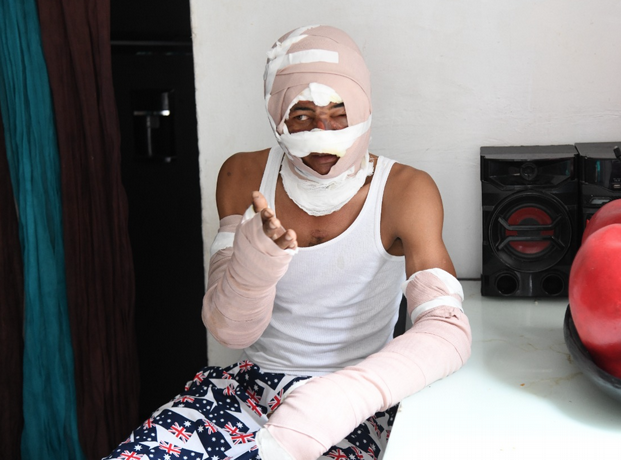 “When I came to realize the fire I was already wrapped up together with Germán Rodríguez (serious intern due to burns) and my uncle José del Carmen (deceased)”, Danny Concepción begins to narrate about the trauma he experienced inside one of the rooms of the Canal del Sol building, which caught fire on Wednesday afternoon.

The morning of that day, José, about 77 years old, had asked his nephew to be his assistant and to support him with some painting and welding work that he had to do in the three-story building. He agreed. It was not the first time that they carried out work together and for the television plant.

Around 2:00 in the afternoon, the three of them (José, Danny and Germán) are doing the work: “I don’t realize if there are many people in the studios who are on the second level,” he clarifies, but he says that there He was… painting some metallic tubes inside one of the rooms, while Germán and his uncle joined other metallic materials.

After an hour, he realizes, together with José and Germán, that the building is on fire and that is when they try to leave the studio where they were.

“When I left, I saw myself covered by the fire, I grabbed the fire extinguisher, but there was no time. I released it and the door, without a lock, was sealed by the pressure of the candle”, she says.

Just at that moment the countdown began, the anxiety and despair. She had to come up with a plan and get out of the four walls, which had no ventilation.

As the flames spread outside the room, smoke entered and filled the room, Danny says. Germán and José tried to remain calm and offered escape alternatives.

At that moment, they hear the screams and cries of some employees (men and women) who had not finished leaving the Canal del Sol facilities. They felt trapped.

They cried out for help and asked for help from the residents of the La Yuca neighborhood, which is behind the campus.

Danny, 47, began to look at the door and noticed that it was sealed at the top, but it was “opened a crack” at the bottom.

“The idea came to me to lie down and pull it from below. I lay down on the floor, stuck my legs to the walls on the other side and slid down hard, ”she says.

Germán and José remained standing. When the door opened, the fire caught them and they stayed behind.

“I had to lie down to open the door, but they remained standing. The room was loaded with oxygen, so when the fire came under pressure, it burned them. The fire continued forward, upwards… Only my head and arms were burned”, she describes.

Danny continued to sneak, crouching down, darting in and out of the studios until he came to the stairs that led to the first floor. “That was flooded and I went to the other room and from that I came back and then I saw a gap and I went back and lay down until I could go out on the stairs,” he testifies.

After a few minutes, Germán came out behind, however, his body was almost completely charred. José stayed in the rubble. “I got home, I spread egg white and vanilla. I didn’t wait for 9-1-1 to come or anything. I myself went to the Central hospital and then they took me in an ambulance to Ney Arias Lora”, he says.

Yucca is in mourning

The next day, you could still feel the smell of burning from the smoke and flames that almost completely consumed the Canal Del Sol building.

The building was surrounded by a great silence, a lot of tension. The same was felt in the neighborhood of La Yuca.

Elizabeth, a resident of the place, expressed with nostalgia and sadness that “La Yuca was in mourning for the losses they had, that they were people from the same place”, in addition, she said that it was a very dramatic moment and a lot of panic.

“I was selling my fried food and when I saw that fire I started shouting at the neighbors to get out. People were afraid that those two plants that are there would explode. If that blew up all of this he was going to leave, ”she recalls.

“Those people shouted for help, they were throwing themselves. The entire neighborhood came out and two boys got in to get people out,” added Enmanuel Montero.

Some workers were carrying out cleaning tasks in the channel. They were observed sweeping the black waters of the sinister.

In addition, they carried out a survey and tried to recover the technological equipment that was left unharmed.

Situation of the wounded

The two patients who suffered severe burns in the fire and who are in the Doctor Ney Arias Lora Trauma Hospital are torn between life and death, presenting up to 100% of their body surface burned.

This was reported by Dr. Eddy Bruno, director of the Burn Unit of the aforementioned medical center.

The 22-year-old, Kelvin Bryan Castillo, has 100% of his body surface burned; as well as he also has deep second and third degree injuries.

While Germán Rodríguez, 56, has 75% second and third degree flame burns on the face, neck, upper limbs and both legs.

He has an inhalation injury and is under mechanical ventilation. Added to this is the component that he is a patient with hypertension and diabetes, said Dr. Bruno.

“They are on mechanical ventilation, with probable renal dysfunction because they are oliguric patients, that is, they urinate very little (one of the early signs that suggest that the general condition of the patient is deteriorating) which makes it impossible for us to hydrate and that prevents its evolution”, said the specialist in caumatology.

While the third of the patients, Danny was discharged with burns on 10% of his body.

The fire in the television channel has left a balance of two people dead so far and three injured.

KNOW MORE
I was painting.

One of the victims, who died in the fire last Tuesday in the Canal del Sol in the Naco expansion, was identified as José del Carmen Reyes, 77, who was painting the building.

The director of the Burns Unit of the Doctor Ney Arias Lora Trauma Hospital recommended that companies create prevention plans and carry out drills to avoid victims. “We do not have prevention or policies to prevent, or education of the citizen of what they should do when a person burns,” said the doctor.

Relatives of patients with serious burns on their bodies were in the center’s Psychology Department, receiving support and training from specialists.

Vaccination of over 16s extended to private nurses