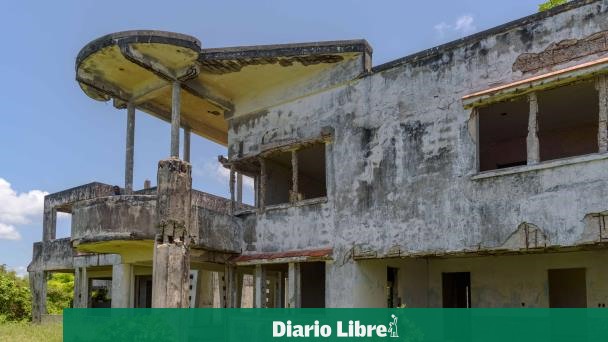 The “House of Ivory”, a two-story building that the dictator ordered to be built Rafael Leonidas Trujillo on the shore of Najayo beach in San Cristóbal to meet people who had a close relationship with the dictator. It went from being a country house to a local detachment and later to being a refuge for some homeless people.

The building is distributed in two parts; one where the bedroom was Trujillo and the other where he lodged his guests. It has six bedrooms with bathroom and dressing room, living room, anteroom, several terraces and balconies, a utility room, a continuous gallery, a small office, wide corridors, back and front patio, cistern and well.

The historian Juan de la Cruz from the School of History and Anthropology of the Autonomous University of Santo Domingo (UASD), maintains that it would be good to take advantage of that space to create “The antithesis of what that house was, something far removed from the nature for which it was built.”

De la Cruz considers that making a museum in that place would mean erecting “a monument to terror and hatred” and that it can be restored as a space of freedom and in favor of the rights of citizens and replicate the initiative in other assets that the dictator in other provinces of the country.

“I only came here Trujillo with their wives and some characters who enjoyed their esteem and who belonged to their intimate circle of friends”, commented in a low voice a woman consulted by Free Journal during a tour of the house, from where part of the Caribbean coast can be seen.

The elders of the place make stories of who went to the “House of Ivory” and as what, according to what little they could see, since the space was cordoned off by a barrier of large stones that covered the visibility of what was happening there.

On Monday, May 30, it will be the 61st anniversary of the assassination of the tyrant, the adults who during their childhood lived part of the dictatorship tell how the older men had to do voluntary service on the shores of the beach to watch that they did not approach boaters to shore.

“My father was authorized to enter the farms of Trujillo to look for the raw material that were the buds of the cane plants that were planted all over the beach with which my mother made the yellow brooms that they used to clean the barracks and other public places,” says Nicolás Guillén, a native of of Najayo, San Cristobal.

He explained how he and his brothers were in charge of weaving the ropes that his mother used to tie the broomsticks to the buds. In addition, he added that the payment for their services by the dictator was to allow them to cut materials to make more brooms and sell them to support the household.

Guillén maintained that from the cistern of the house of Trujillo was that people supplied themselves with water, only when the person who took care of it was authorized to open the door. Once closed, no one could approach the house or the beach.

During his story, the 75-year-old man recalled that there was a private road that was parallel to the main street and that it was used only by Trujillo to travel to Hacienda María (another property owned by the dictator), located in Nigua, in that province in the south of the country.

walkway on the beach

The well-known Najayo beach has a kind of breakwater, which was actually part of the physical structure of a walkway that the former president had built to enjoy the beach with “his women”, a bridge that formed a natural pool with lights and railing to walk on it.

César Lugo Váldez, operations officer of the Civil Defense of Najayoassures that “part of the bridge at the bottom of the sea still remains intact and even the irons that held the lamps can be identified when one is in place.”

Lugo has more than 20 years doing diving activities on the beach of Najayo and explains that the house has a back staircase that reached the beach, but over time it has been deteriorating and there are only “a few steps” left.

On the edge of the beach there was a public bathroom with three spaces, one with a shower and two half-baths for the dictator’s visit to use while bathing on the beach. According to Lugo, part of the flat can be seen among the sands of the spa.

Dominican journalist specialized in economics and finance, graduated from the Universidad Dominicana O&M.

Ancelotti, curvaceous trainer who has become the greatest