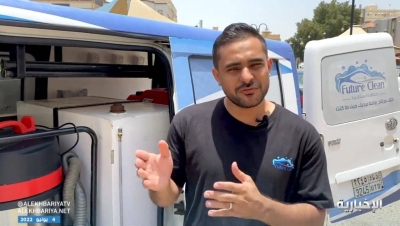 Al-Marsad newspaper: Al-Ekhbariya channel presented a report about a citizen named Abdel Moneim Al-Rifai, a physiotherapist, who also works in a car wash, in search of additional income.

Abdel Moneim came from the far southwest of the kingdom from Jizan to Jeddah in search of work.

Abdel Moneim said: “My whole life was in Jizan Abu Arish until the job came to Jeddah, and now I have been in my grocery store for 4 years.”

And he continued, “I am a physiotherapist, graduated from Jazan University, an employee in Jeddah, in a job, but I need an extra income, work and tire yourself, and with fatigue the dream will come true.”

He continued, “The idea started from 2018, I was studying at the university, and I worked in a cashier’s restaurant. The idea came from the fact that my car was always very dirty, and I am a lazy person in the laundries.”

He continued: “At that time, I had the money, so I decided to marry, the project. I went to marriage and said, God willing, the project would come with the days, and I took out a personal loan. At first, things were difficult, but every diligent has the share.”

He pointed out that: “In some days, the income may reach 700 or 800 riyals per day, some days it is less. The issue requires patience, and with marketing, you will be the first in the market and its income is great, God willing.”

He explained that the difficulties he faces are, “The first thing people see is you, you are Saudi and you work in a car wash and cleaning. Some see this as negative, but Saudi youth are nowhere to be found.”

Abdel Moneim stressed: “Work is not a defect, and if I sit for 24 hours, I work, and by God I do not have a problem at work,” explaining that many people supported him, especially the father, mother and wife.

The Constitutional Committee: The conclusion of the eighth round with great disagreements..a new date

the Chicago Bulls want to be ambitious