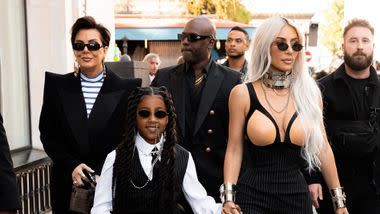 Kim Kardashian and her daughter North are taking advantage of their visit to Paris to attend the Jean Paul Gaultier fashion show, this Wednesday, July 6. Since July 4, Haute Couture Fashion Week is in full swing in the capital. After the Chanel show which brought together Marion Cotillard, Elsa Zylberstein and Julie Gayet, Olivier Rousteing presented his very first Haute Couture fall-winter 2022-2023 collection, for Jean Paul Gaultier. It was at the brand’s headquarters that the guests were invited to enjoy the parade. Among them, Kim Kardashian and her daughter North were present. A duo at the forefront of fashion The day before, the mother-daughter duo had been photographed in the streets of Paris. Kim Kardashian has indeed traveled to Paris to be able to enjoy Fashion Week with her eldest daughter. The reality star and North then appeared with a matching nose ring, as well as long dangling chains connected to the rest of their silver jewelry. For the occasion, Kim Kardashian highlighted her figure, emphasizing her waist, in a black dress with tight-fitting stripes, and completed with a nude-colored bra, typical of Jean Paul Gaultier. An outfit coordinated with that of her daughter, as North opted to wear a striped jacket and pleated skirt with a skinny tie over a sleek white shirt. She boosted her waist with a pair of platform boots for the event, as well as a beret. Mother and daughter had also opted for the same sunglasses. The duo were then joined by Kris Jenner, looking very chic in a masculine pointy-shouldered suit. Sunglasses on the nose, the mother of Kim Kardashian was dressed in a sailor turtleneck, in a nod to Jean Paul Gaultier.

God of War Ragnarok prepares us for battle, what gods and monsters will face Kratos?