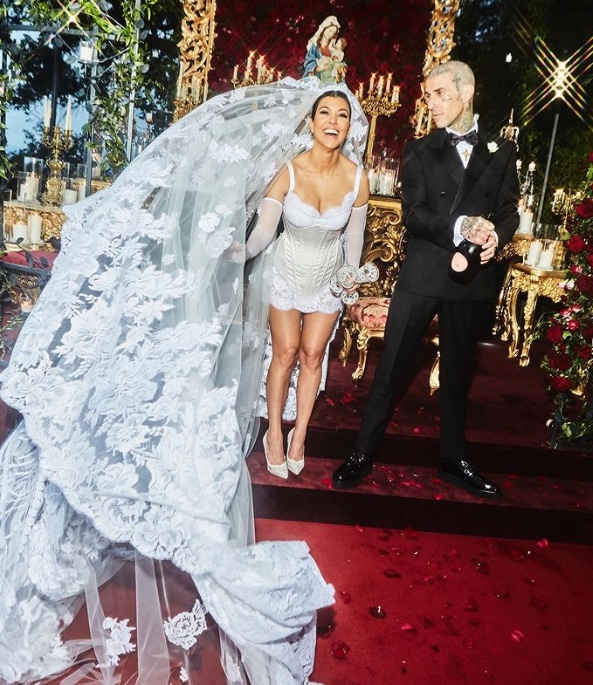 The wedding in Italy was the culmination of a series of ceremonies with which Kourtney Kardashian and Travis Barker sealed their love.

With the sponsorship of the Dolce & Gabbana firm that took care of a large part of the wedding expenses, Kourtney Kardashian and Travis Barker married this weekend in Portofino, Italy. Until there came the entire Kardashian clan wrapped in expensive dresses from the fashion house.

Just a week after doing it as a civilian in Santa Barbara, California, in front of some family and friends, this time they threw the house out the window.

Kourtney arrived before the priest in a white, short wedding dress covered with a long veil that had the image of an embroidered virgin, according to the first images that were released through media such as the People magazine portal. .

The Kardashian clan met in Portofino, Italy, since last Thursday before the big event and walked through restaurants, historical places and even sailed on a huge yacht.

Sources close to the couple told TMZ that the wedding took place at a seaside resort owned by Domenico Dolce and Stefano Gabbana. The farm is also where the family has stayed during their stay in those lands. Throughout the weekend, Kris

Jenner and all of her daughters, including the bride, appeared in Portofino wearing expensive signature outfits.

According to Britain’s Daily Mail, Kourtney and the Kardashian clan struck a deal that would earn the designers “millions of pounds” in free advertising for the fashion house.

Part of the agreement included that Dolce & Gabbana would have paid for the transport of the guests from their hotels to the port of Portofino “in a fleet of four classic wooden speedboats”.

According to the Daily Mail, stars like Beyoncé had access to these boats equipped with accessories from the famous brand, including “animal print cushions and towels”.

“The Italian fashion house has been heavily involved in organizing all aspects of the lavish wedding celebration,” the newspaper noted.

According to TMZ, Kourtney Kardashian and Travis Barker also rented Castle Brown, a historic building that once served as a military observation post in the 13th century.

There was the reception after the wedding ceremony. Some Dolce & Gabbana staff in Milan have been sent to Portofino in recent days to oversee wedding preparations, the Daily Mail reported.

The three weddings of Kourtney Kardashian and Travis Barker

The one in Italy was the climax to a series of ceremonies with which Kourtney Kardashian and Travis Barker sealed their love.

The first wedding they performed was in Las Vegas on April 4. On that occasion it was a kind of rehearsal, since the couple did not have a license to carry out the marriage.

Then last weekend, they got married legally and legally in Santa Barbara, where Kardashian wore a short $1,800 Dolce & Gabbana wedding dress.

This Sunday was the religious wedding on Italian soil, after the musician asked her to marry him in October 2021 on the beach in Montecito, California.

Have the information instantly on your cell phone. Join the Diario Primicia group on WhatsApp through the following link:https://chat.whatsapp.com/F8uA0zT8ho4ChOprPUU6lh

We are also on Telegram as @DiarioPrimicia, join us here: https://t.me/diarioprimicia