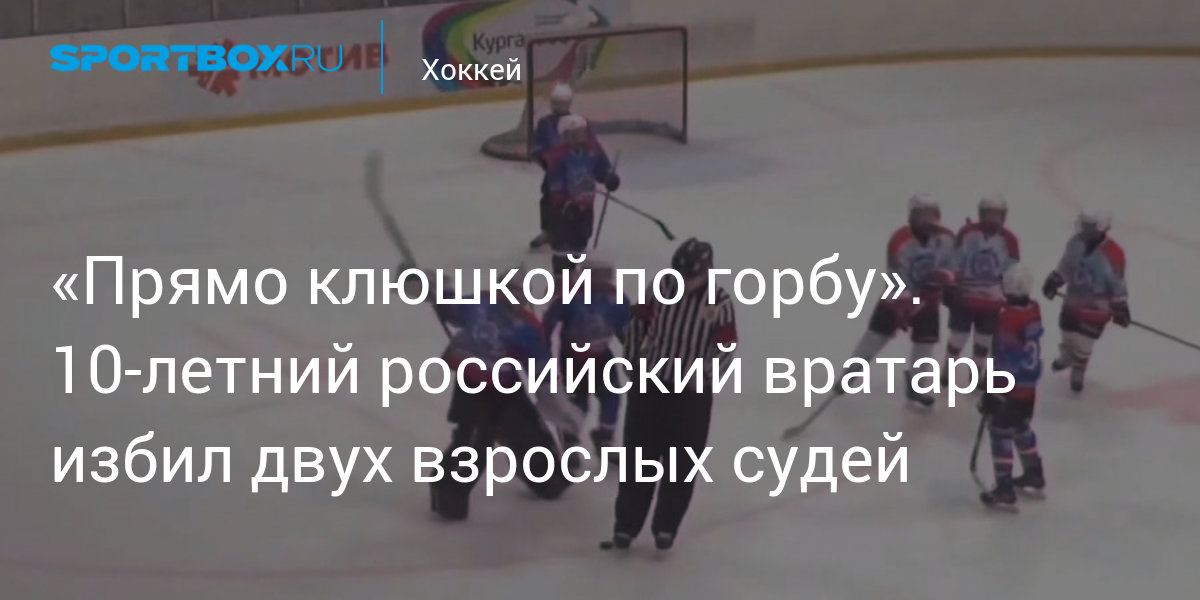 The boy turned on the berserk mode and brutally attacked the arbitrators. The commentator just laughed.

Regional tournaments of junior hockey teams in most cases are of interest exclusively to parents and people responsible for the training of young talents. Sometimes such competitions are attended by scouts of large teams.

But the act of a 10-year-old goalkeeper at one of these tournaments in the Sverdlovsk region caused a negative public outcry.

The child attacked the adult judges, and the commentators only laughed.

The goalkeeper lost his temper and beat the gate

The scandalous episode occurred in the Icebreaker hockey tournament match for players under 11 years old, held in the city of Kurganovo, Sverdlovsk Region. Two teams of the Youth Sports School No. 19 of the HC Uralmash met in it. The coaches of the sports school divided the young hockey players unevenly, bringing together stronger players in the first team.

By the end of the third period, Youth Sports School No. 19-A naturally beat their teammates with a score of 10:1. The teams calmly finished the match, but at that moment the goalkeeper of the second team Artemy Akshumov suddenly wanted to stick out his stick when an opponent was passing by. The attacker stumbled and fell to the ice.

For some reason, the goalkeeper began to deny the obvious violation, but the referee was adamant. He wrote out a two-minute penalty to the young hockey player, which the field player went to serve. Akshumov did not like this decision very much. Emotionally, he began to hit the woodwork with his stick with all his might, while the teams were preparing for the throw-in.

“Already the judge can give bream?”

The match continued when the goalkeeper finally calmed down. But the young player did not hold back for long. Already during the next pause, he committed an act unacceptable for any hockey player, which he will be remembered for a long time to come.

After an exchange of phrases, despite the young age and the difference in size, the goalkeeper attacked the referee who was nearby. Several shots from the goalkeeper reached the goal. The referee did not receive damage from Akshumov’s blows, but he wrote out a well-deserved removal for him until the end of the match.

The disappointment of the goalkeeper knew no bounds. On the way to the bench, he also managed to attack the second referee, and he did it from behind. The referee received several blows, some of which Artemy struck with a club. After that, the enraged young hockey player was “helped” to leave the ice by both referees.

– Opa, can the judge already be given a “bream”? – the commentator of the meeting on YouTube reacted with bewilderment to this situation.

– Here the referee drove up to talk with Artemy Akshumov and explain everything that was needed, but Artemy boils over and just slaps the judge with his fist. What a gesture! This is Uralmash, baby! He just can’t stand it and hits directly with a club on the hump, between the shoulder blades, ”another commentator who worked on this match emotionally described the situation.

The reaction of the commentators caused bewilderment among the audience, because they not only did not condemn the little violator, but also seemed to encourage him, laughing out loud.

Polevoi stood at the gate and did not let

The emotional act of the goalkeeper of the second team of the Youth Sports School No. 19 put the partners and the coaching staff in a difficult position. The Uralmash squad did not have a spare goalkeeper.

The place at the gate had to be occupied by a field player, since there was a little more than a minute left before the end of the match, and time was not stopped. For the remaining seconds of the meeting, nothing dangerous happened. The match ended with a crushing victory for the first team.

The reasons for Turkey’s resistance to NATO expansion are revealed