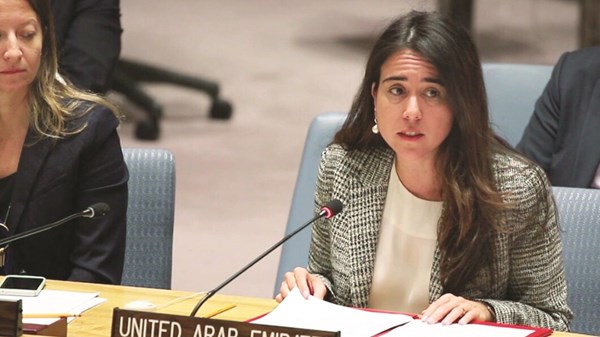 His Excellency Lana Nusseibeh, Permanent Representative of the UAE to the United Nations, said that the terrorist Houthi militia will not succeed in undermining the country’s status as a safe haven, noting that the UAE will continue its diplomatic efforts aimed at de-escalation and at the same time reserves the right to defend itself defensively and offensively.
In statements to CNN, Her Excellency Lana Nusseibeh added that the UAE made it clear that the two Houthi terrorist attacks on the country originated from Yemen, and that there is a need to stop the flow of arms and illegal funds to the militias, noting the UAE’s ability to intercept these attacks. Her Excellency Lana Nusseibeh added: “The UAE has urged Washington to return the Houthi militias to the terrorist list, and is also discussing with its partners increasing pressure on the Houthis to revitalize the stalled peace efforts led by the United Nations.” And she added, “This means that they will be included again in the sanctions lists, and perhaps additional personalities will be added, and this means that the illegal flow of weapons and funding for them will stop.”
Her Excellency added: “The intended objective of these attacks was to cause widespread harm to civilian infrastructure and to civilians themselves, which is of course unacceptable and unprecedented and constitutes a flagrant violation of international peace and security.”