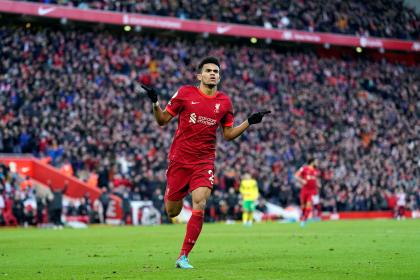 Luis Fernando Díaz has been one of the most striking and positive signings of the winter market in England. His arrival in Liverpool is promising, and the Colombian has been in charge of confirming the expectations that exist for his arrival, since he has played five games, between the Premier League, FA Cup and Champions League, and has played an important role in a squad that has several injured in the attack front.

However, the idyll that Díaz lives in Liverpool could not have happened, if another club, this one from London, had closed the advanced conversations that he had with ‘Lucho’ and with Porto de Portugal.

“I spoke with Luis Díaz on the phone, we were quite advanced to sign him from Porto. I understood that Liverpool were planning to sign him in June, so we thought we’d try to get him in January. I don’t know if that affected Liverpool’s decision, but he’s a really good player and we didn’t get it,” West Ham United manager David Moyes confessed.

And it is that the ‘hammers’ were able to hire Luis Díaz, as well as Tottenham Hotspur, but the player and Porto were waiting for the offer of a bigger team, until Klopp and his club arrived to convince the Colombian to play in England.

Moyes noted that “our ambitions are to sign the best players we can, to try and improve West Ham. So I spoke with Luis Díaz and his agent, as well as an interpreter. I really hoped that he was going to choose West Ham, but we didn’t get it”, expressing his frustration at the fallen signing of the Colombian, currently prominent in Liverpool.