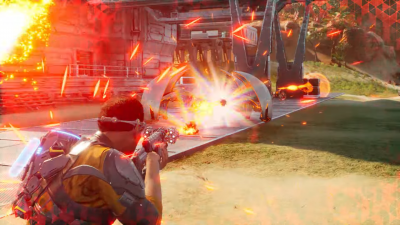 Of all the licenses acquired by THQ Nordicthere was Outcastwhich was first entitled to its remake called Outcast: Second Contact. The studio is now undertaking to develop a real sequel called Outcast 2: A New Beginning with Appeal Studios, presented last year and back to Digital Showcase from this evening.

He got a second trailer taking us back to the alien world ofAdelphato make us find our hero Cutter Slade, tasked with leading a revolution against evil robots. Some But tells the legend of theLukaï, prophetic savior who is none other than our protagonist. The opportunity to see some gameplay in jetpack and phases of TPS muscular.

20 years after the release of Outcast, the award-winning action-adventure title and pioneer of non-linear open-world gaming, discover its long-awaited sequel in which Cutter Slade returns to the spectacular alien world of Adelpha. Resurrected by the almighty Yods, he never expected what he would discover: the Talans were enslaved, the world of Adelpha was stripped of its natural resources, and the ghosts of its past on Earth seem linked to the robot forces that have invaded the planet. It is up to him to save the planet once again.

The team behind Outcast 1 have come together to bring you this fascinating world full of dangerous creatures where the Talan people live, an ancient civilization whose fate has been intertwined with that of Earth since the events of the first opus. You will play as Cutter Slade, a former Navy SEAL who has lost none of the verve he had in the 90s. However, as the world around him has changed, he will eventually evolve in turn.

To save Adelpha, you can…

While waiting for the release date and the opening of pre-orders for the PC, PS5 and Xbox Series X|S versions, Outcast: Second Contact is available from €7.90 on Amazon.fr.

Education: seeing the truth in the face