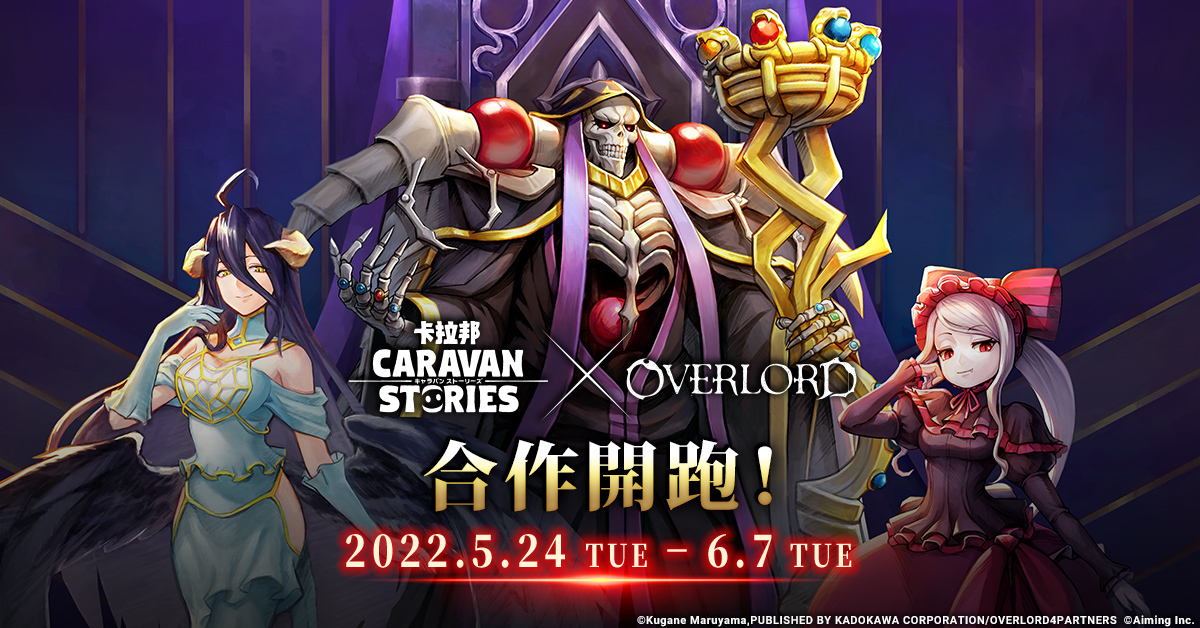 “Ainz”, the ruler of the Great Underground Tomb of Nazarick, descends with “Albedo” and “Shalltear”

In this cooperation event, the dead ruler and absolute master of the Great Tomb of Nazarick, “Ainz”, will lead the guardian master “Albedo” and the stratum guardian “Shalltear” to the world of Karabon.

“Ainz” will use the superpower magic “Skyfall” that was used in the “Shalltear” battle at the end of the first season of the anime to annihilate the surrounding enemies. Don’t miss the scene where he uses a lot of paid items before casting.In addition, he can also be summoned in battleDeath knightto exclude enemies who intend to approach Ainz.

Armed with a half-moon axe, “Albedo” is active as a tank guarding “Ainz” and other allies. However, despite her role as a tank, she still possesses excellent attacking abilities, and would like to see a hammer of death that can drop the death hammer on the enemies of “Ainz” and the Great Tomb of Nazarick.

The Valkyrie of Blood “Shalltear” is a close-range fighter who excels in both long-range and close-range combat. It can slaughter enemies close to it and absorb the output damage to restore itself. It can also use “Charming Magic Eyes” to charm enemies to distant enemies, and then throw a spear to deal a lot of damage. In addition, she also has the anti-reverse skill “Blood Frenzy”, which needs to deal a lot of damage in one breath.

“Albedo” who transforms into a shield to block the enemy’s attack on the front line, “Shalltear” who has no blind spots at far and near, and “Ainz” who casts superposition magic from the rear can form a guild worthy of the guild “Ainz The invincible group in the name of “Ur Gong”, welcome to gather these 3 characters and start to destroy the world.

To commemorate the holding of the cooperation event, a post sharing promotion event is currently being held on Facebook to have the opportunity to win the original novel and the voice actor signature board. Just share the designated post and leave a message for the designated content to participate. As the fourth season of the TV animation is confirmed to be broadcast, the official will select 1 player to send the original novels 1-14 episodes, and a total of 6 players will be selected to send Hino Yu (playing Ainz), Yuan Yumin (playing Albedo) and Uesaka Matsuya (as Shalltear)’s signature board. Active participation is welcome.

Hino Yu (as Ainz)’s Signboard Sweepstakes (2 winners will be drawn):

In 2138, the online game “YGGDRASIL”, which once caused a wave in the heyday of somatosensory games that can be played freely in virtual reality, silently ushered in the termination of service.

After saying goodbye to the few guild members who came to say hello, the player “Moonga” waited quietly for the last moment. However, the time has come, and the game has not forced him to log out. NPCs even suddenly have self-awareness. Outside the guild, it has become a different world that has never been seen before.

Momonga changed his guild name to “Ainz Ul Gown” in order to find his old comrade and began to conquer another world. The legend of the ruler of death, the king of the undead, who held the world in his hands with overwhelming power, begins!