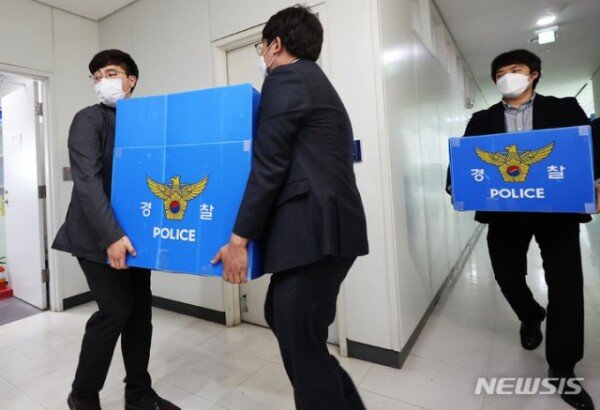 The police, who are investigating the allegation of preferential treatment for the apartment development project in Baekhyeon-dong, Bundang-gu, Seongnam-si, Gyeonggi-do, which had been controversial for the ‘retaining wall apartment’, have secured a document that approved the change of use of the development site when Rep. Lee Jae-myung of the Democratic Party of Korea was in office as Seongnam Mayor.

The anti-corruption and economic crime investigation team of the Gyeonggi Southern Police Agency sent about 10 investigators from 9 am to 3 pm on the 16th to conduct a search and seizure of Seongnam City Hall.

At that time, it was known that the targets that the police entered into the search and seizure were development-related departments such as the Urban Planning Division and the Housing Division.

In the process, the police secured documents related to the increase in the use of the site approved by Rep. Lee, who was the mayor of Seongnam at the time of the Baekhyeon-dong development.

The Baekhyeon-dong apartment, which was built around the same time as the Daejang-dong apartment in Seongnam-si, raised the use of Seongnam City from a natural green area to a quasi-residential area by four steps, and it was converted into a condominium apartment, and a private contractor made more than 300 billion won in sales profit. woke up

Another problem was that the apartment had a huge retaining wall with a maximum height of 50 m and a length of 300 m.

In November of last year, the People’s Power also filed a complaint with the Supreme Prosecutor’s Office against lawmaker Lee, who had licenses and licenses as the mayor of Seongnam at the time of development, on charges of negligence, etc.

This case was also transferred to the Gyeonggi Nambu Police Agency and merged with the investigation request from the Board of Audit and Inspection, and the Anti-Corruption and Economic Crime Investigation Team is investigating.

During a state audit held in October of last year, while serving as Gyeonggi governor, Rep. Lee said, “(Park Geun-hye’s administration) was forced to change its use by threatening that the Ministry of Land, Infrastructure and Transport (of the Park Geun-hye administration) would take issue with it for negligence.” said

“China is trying to destroy Taiwan’s democratic life” Tsai Ing-wen: Taiwanese did not back down and responded to the challenge head-on | Politics | Newtalk News

According to Chevrolet, the new Montana will have the best interior capacity in the segment