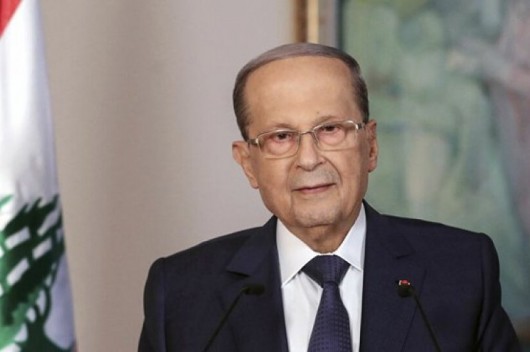 The President of the Republic, General Michel Aoun, received this morning at Baabda Palace a delegation from the Arab Council of Ministers, which included: Chairman of the 37th session of the Council of Arab Justice Ministers, Algerian Minister of Justice, Judge Abd al-Rashid Tabbi, Palestinian Minister of Justice, Judge Muhammad Fahd al-Shalaldeh, and Minister of Justice in the Kurdistan Regional Government, Judge First. Ahmed, in the presence of Justice Minister Henry Khoury, Algerian Ambassador Abdel Karim Al-Rikabi and Palestinian Ambassador Ashraf Dabour, Assistant Secretary-General of the League of Arab States and President of the Arab Center for Legal and Judicial Research of the Council of Arab Ministers, Ambassador Abdul Rahman Al Solh, Advisor to the President of the Kurdistan Region of Iraq Ghazi Sabra, The Deputy Ambassador of the Arab League in Beirut Youssef Al Sabawi, in addition to the Director General of the Presidency of the Republic, Dr. Antoine Choucair, the former Minister Salim Jreissati, and advisors Rafik Chelala and Osama Khashab.

The delegation members explained the reasons for the visit, which is to hold an honoring ceremony tomorrow, Saturday, to award the Arab award for the best doctoral thesis in the Arab world in the field of law and the judiciary to three winners.

Minister Tabbi spoke and expressed his and the delegation’s pleasure for their presence in Lebanon, and thanked President Aoun for receiving him, and conveyed the greetings of Algerian President Abdelmadjid Tebboune and the Algerian people to the President of the Republic and to Lebanon with “wishes of prosperity and stability”, while the rest of the delegation members stressed “the importance they attach to Lebanon and the love that it occupies and the people.” The Lebanese are in the hearts of the peoples of their countries.”

President Aoun welcomed the delegation “in Beirut, which opens its doors to everyone, especially to the Arab brothers,” and stressed “Lebanon’s complete desire to cooperate with Arab countries, and solidarity in all issues that help develop and strengthen laws and unify legislation in these countries,” and wished the delegation “success.” In his projects and the work he is doing to uphold the spirit and independence of the law, and for the delegation to contribute, through its capabilities and capabilities, to alleviating the problems that may sometimes arise between Arab brothers and preventing them from developing into what no one wants.”

He praised “the effort made by the Council of Arab Justice Ministers to promote scientific research,” and praised “the choice of Beirut, Umm al-Sharia, as a venue for the honoring ceremony, which hosts the headquarters of the Arab Center for Legal and Judicial Research,” stressing that “this event is a new evidence of faith in Lebanon.” by his brothers, with his ability to overcome the difficulties that stand in his way, as he has done throughout his ancient and contemporary history.

On the other hand, the President of the Republic cabled to Saudi King Salman bin Abdulaziz, congratulating the Kingdom’s founding anniversary.