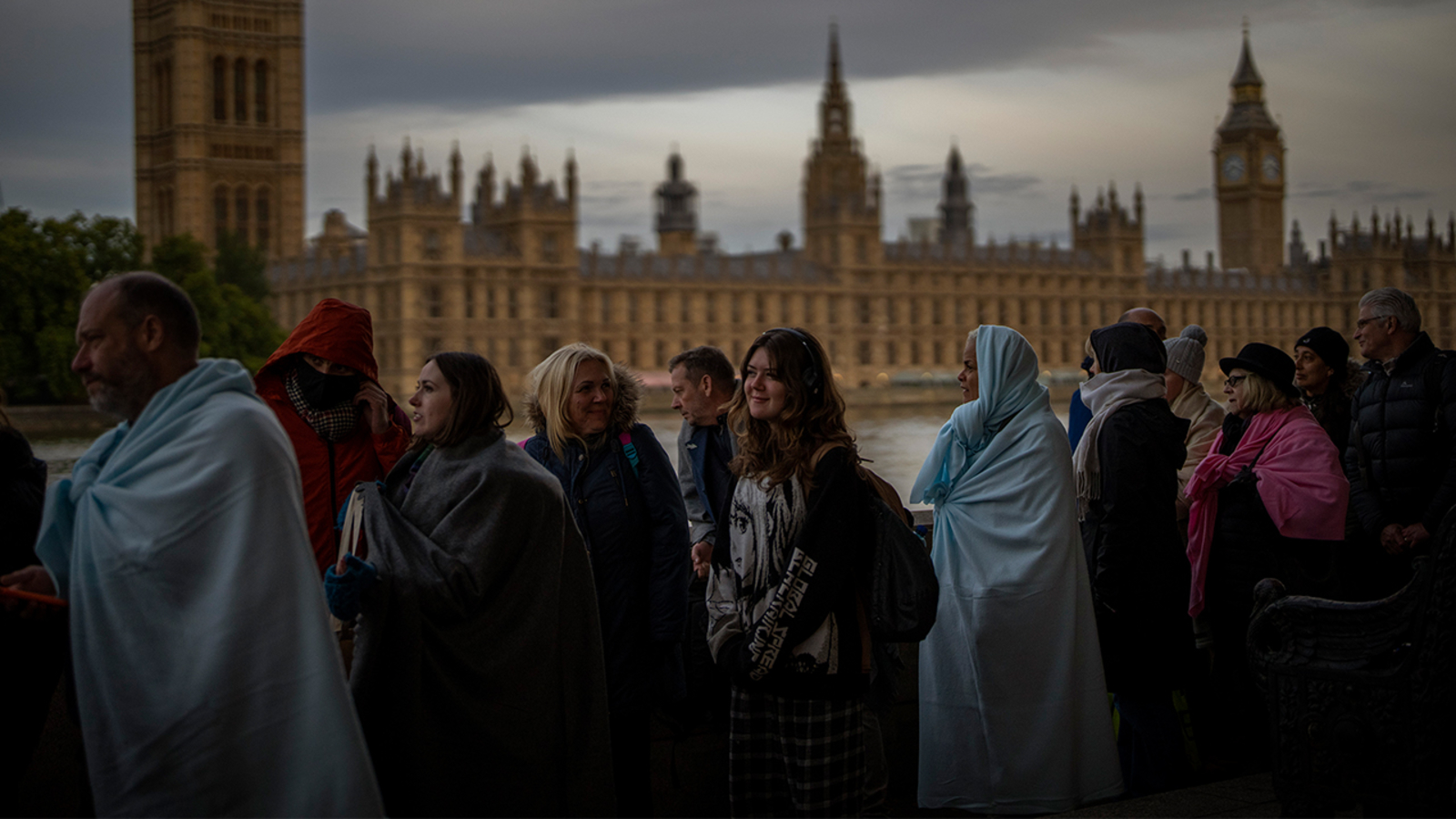 LONDON — Thousands of police, hundreds of troops and an army of officials made final preparations Sunday for the state funeral of Queen Elizabeth II – a spectacular display of national mourning that will also be the biggest gathering of world leaders for years.

U.S. President Joe Biden and other dignitaries are arriving in London for the funeral, to which around 500 royals, heads of state and heads of government from around the globe have been invited.

Thousands of people continued to line up around the clock to file past the queen’s coffin as it lies in state at Parliament’s Westminster Hall, braving chilly overnight temperatures and waits of up to 17 hours. The queen’s eight grandchildren, led by heir to the throne Prince William, circled the coffin and stood with heads bowed during a silent vigil on Saturday evening.

The miles-long queue is expected to be closed to new arrivals later Sunday so that everyone in line can file past the coffin before Monday morning, when it will be borne on a gun carriage to Westminster Abbey for the queen’s funeral.

People across the U.K. are due to pause Sunday evening for a nationwide minute of silence to remember the queen, who died Sept. 8 at the age of 96 after 70 years on the throne. Monday has been declared a public holiday, and the funeral will be broadcast to a huge television audience and screened to crowds in parks and public spaces across the country.

Thousands of police officers from around the country will be on duty as part of the biggest one-day policing operation in London’s history.

Camilla, the new queen consort, paid tribute to the queen in a video message, saying the monarch “carved her own role” as a “solitary woman” on a world stage dominated by men.

“I will always remember her smile. That smile is unforgettable,” said Camilla, who is married to King Charles III.

A tide of people continued to stream into Parliament’s Westminster Hall, where the queen’s coffin is lying in state, draped in her Royal Standard and capped with a diamond-studded crown. The number of mourners has grown steadily since the public was first admitted on Wednesday, with a queue that stretches for at least five miles (eight kilometers) along the River Thames and into Southwark Park in the city’s southeast.

Honoring their patience, Charles and William made an unannounced visit Saturday to greet people in the line, shaking hands and thanking mourners in the queue near Lambeth Bridge.

WATCH: The death of Queen Elizabeth and the tributes underway before her funeral

William stood with his head bowed at the head of the coffin and Harry at the foot. Both princes, who are military veterans, were in uniform. Mourners continued to file past in silence.

“You could see that they were thinking hard about their grandmother, the queen,” said Ian Mockett, a civil engineer from Oxford in southern England. “It was good to see them all together as a set of grandchildren given the things that have happened over the last few years.”

Harry, who served in Afghanistan as a British army officer, wore civilian clothes earlier in the week as the queen’s coffin left Buckingham Palace because he is no longer a working member of the royal family. He and his wife Meghan quit royal duties and moved to the United States in 2020. The king, however, requested that both William and Harry wear their military uniforms at the Westminster Hall vigil.

Before the vigil, Princesses Beatrice and Eugenie issued a statement praising their “beloved grannie.”

“We, like many, thought you’d be here forever. And we all miss you terribly. You were our matriarch, our guide, our loving hand on our backs leading us through this world. You taught us so much and we will cherish those lessons and memories forever,” the sisters wrote.

The silence in the hall was briefly broken Friday when a man lunged at the coffin. London police said Sunday that a 28-year-old London man, Muhammad Khan, has been charged with behavior intended to “cause alarm, harassment or distress.” He will appear in court on Monday.

The lying-in-state continues until early Monday morning, when the queen’s coffin will be moved to nearby Westminster Abbey for the funeral, the finale of 10 days of national mourning for Britain’s longest-reigning monarch.

After the service Monday at the abbey, the late queen’s coffin will be transported through the historic heart of London on a horse-drawn gun carriage. It will then be taken in a hearse to Windsor, where the queen will be interred alongside her late husband, Prince Philip, who died last year.

Copyright © 2022 by The Associated Press. All Rights Reserved.

Bears In Space, Let The Bear In You Run Wild

IKIGAI, the most advanced line in Gran Canaria in Dermatology, Aesthetic Medicine and Plastic Surgery