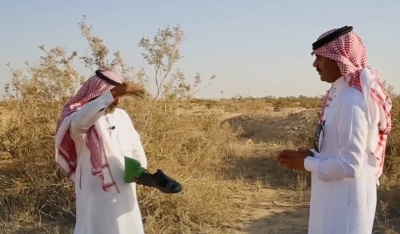 Al-Marsad newspaper: Al-Ekhbariya channel clarified, during a news report, the importance of the profession of trail-cutting, in inferring footprints, slippers and hooves, as trail-cutters have an amazing skill in detecting mysterious incidents.

During the report, the most famous archaeologist in the north of the Kingdom, Falah Al-Mansi, spoke about the beginning of his learning of the profession, saying, “I started cutting tracks with bares, so I used to follow up when there was a young she-camel, I would cut its tracks and know if it followed us or our neighbors, until I was able to distinguish between the tracks.”

And Al-Mansi continued, I served with the security authorities, whether burglary, property damage or criminal cases, and on one occasion I revealed the truth of a murder case in the Qurayyat governorate, in which an innocent person confessed that he was the culprit, and praise be to God, we revealed the truth, and also the case of Baskaka, one of the expatriates, was killed and we revealed his case.

During the report, Al-Mansi revealed a method used by smugglers to hide their tracks, saying while holding a piece of sponge, this is used by smugglers and intruders, where a person ties it to his shoes to change the direction of his shoes, so whoever sees the traces says that this person is returning, not going.

Trump gives up his daughter Ivanka because of her testimony in Congress.. “The Hill” reveals the details

Case in Missouri: Teenager paralyzed after dare in fraternity – Panorama