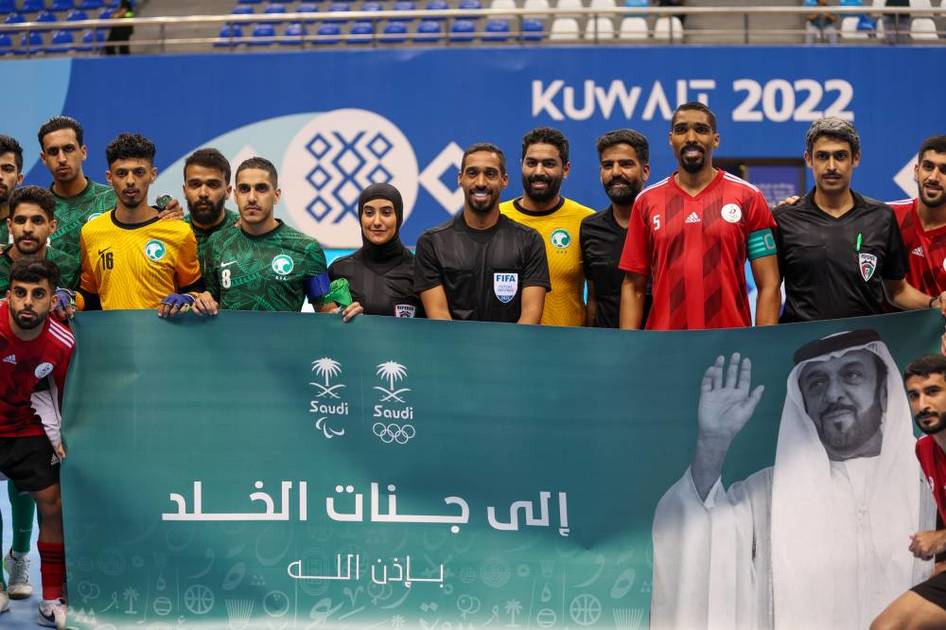 The UAE’s tally rose to 22 colorful medals in the third Gulf Games hosted by Kuwait, with the participation of more than 1,700 athletes from the Cooperation Council for the Arab States of the Gulf. The female player of the UAE cycling team, Safiya Al-Sayegh, won first place and won the gold medal in the individual time trial for a distance of 12.7 km. , after she recorded a time of 19:36.31 minutes, two seconds ahead of the Kuwaiti player, Latifa Al-Yassin, who came in second place, winning the silver medal with a time of 19:39.40 minutes, while the player of the Saudi national team, Dania Simbawa, came in third place, achieving the bronze medal. Also, Zahra Hussein did not complete the race due to an injury and her bike swerving during the race.

Yousef Al-Matrooshi won the silver medal at the end of the swimming team’s participation in the 100-meter freestyle race, recording a time of 51.12 seconds.

Our player Salem Ghaleb ranked fourth in the 200-meter backstroke, while he was crowned the first Qatari, and the injury prevented our team player Hussein Al Hammadi from participating in the 400-meter freestyle race.

Safia Al Sayegh, UAE national cycling team player, expressed her happiness for winning the gold in the individual time trial for a distance of 12.7 km, after a strong competition between the participants in light of the strong winds that increased the difficulty of the race and showed the teams of expertise and strength, confirming their strong readiness to compete in the individual general race for a distance 60 km, which will conclude the women’s competitions within the third Gulf Games, and make more efforts to honor the UAE flag.

She said: “I am proud to participate in this edition of the Gulf Games, because of the wide participation of the women’s category, which is one of the largest participations at the level of the Gulf championships, which increased the weight and importance of the competitions, and represented a suitable environment for leaving the Arab and international levels.”

Swimmer Youssef Al-Matrooshi expressed his happiness for winning the silver medal at the end of the swimming competitions in the championship, which included many champions and experienced people, which will reflect positively on his next swimming career. Pointing out that he expected the championship to witness new records in light of the strong competition between the strongest participating swimmers from all over the Gulf, and he is looking forward to achieving better results in the coming period after the conclusion of his participation in the Gulf Tour.

Our national basketball team overcame its Kuwaiti counterpart and paid the price for the mistakes of the third half, losing 81-75 after controlling the first half of the match, which it ended in its favour, by 12 points, with a score of 30-42, taking advantage of the good defensive method and its proficiency in the three-pointers, which amounted to 7 of them. Three for Rashid Nasser Al Zaabi, the most prominent star of the match, and our team finished the first quarter in his favour, 19-11, and then advanced at the end of the second quarter with a score of 42-30.

Dr. Mounir bin Al Habib, technical director of the national basketball team, said that the Gulf Games is an important external station for the basketball team to come out in an honorable manner, regardless of the challenges and circumstances, and the basketball competition is characterized by the presence of a preliminary role before the final rounds.

Bin Al Habib pointed out that the basketball team competes free of pressure, especially in light of media talk about the presence of other Gulf teams that appear stronger on paper for reasons, most notably the presence of naturalized players in its list.

The men’s futsal team beat its Saudi counterpart 5-2 after losing the first match against Kuwait and the second match against Oman. It has one match against Bahrain on Tuesday, which will depend on whether the team qualified for the semi-finals.

The volleyball team also lost its opening match against its Kuwaiti counterpart, 0-3, in the match that was held at Sheikh Saad Al-Abdullah Hall. The first is the team with the highest points.

Today, the cycling team continues its participation in the championship through Yousef Mirza and Muhammad Al-Mutaiwee in the individual race against the clock for men for a distance of 26 km on Sheikh Jaber Al-Ahmad Al-Sabah Bridge. Faisal Abbas, Abdullah Muhammad, Salah Al-Din Al-Balushi, and Abdullah Al-Balushi, who will compete during the period from 22 to 26 at the headquarters of the Kuwait Olympic Committee in the Jaber Al-Ahmad Youth Center.

Today, the Badel women’s tennis team arrives in Kuwait and includes Fatima Shahdour, Shamma Al-Muhairi, Latifa Al-Salman, Nouf Omar, Fatima Al-Janahi, Sheikha Al-Janahi, Fatima Al-Madrib, and Maryam Al-Shamsi. The team opens its journey against Bahrain on Tuesday, then faces Oman on Thursday, then Kuwait on Friday and concludes its participation in the match against Saudi Arabia on the 28th of this month.