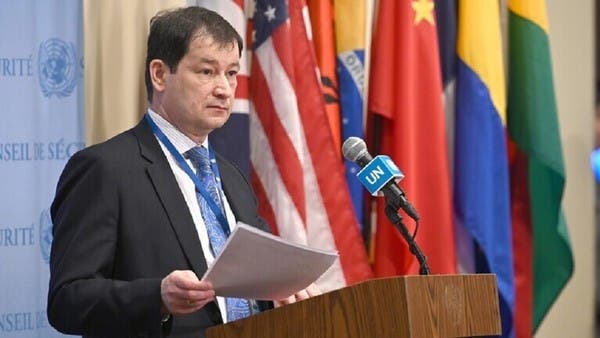 Russia’s Deputy Permanent Representative to the United Nations, Dmitry Polyansky, said in response to Kyiv’s allegations regarding Russia’s closure of ports for the export of food and grain.

“Kyiv gives grain in exchange for arms from the West,” Polyansky said in response to a statement by Ukrainian Foreign Minister Dmitry Kuleba, who claimed that Russia was closing ports for food exports.

“A new threshold of hypocrisy has been reached! It is well known that Russia does not prevent the export of foodstuffs from Ukrainian ports. Kyiv keeps the ports mined and uses foreign ships as shields,” added Polyansky.

Polyansky emphasized that Kyiv pays for arms bills with grain.

Russian President Vladimir Putin’s assistant for economic affairs had previously said that the world will enter a phase of starvation by the end of 2022.

Russia has accused Washington of trying to withdraw grain reserves from Ukraine, threatening a global crisis.

These statements come a day after United Nations Secretary-General Antonio Guterres called on Russia to allow the export of Ukrainian grain stored in this country’s ports, and demanded the West to allow Russian food and fertilizers to reach global markets, in two measures he confirmed would contribute to solving the growing global food crisis.

“Russia must allow the safe and secure export of grain stored in Ukrainian ports,” Guterres said at a ministerial meeting in New York organized by the United States.

He added that it is also possible to “explore alternative transportation routes” to the sea lane for exporting these grains, which are stored especially in silts in the Black Sea port city of Odessa, “even if we know that this will not be enough to solve the problem.”

The Secretary-General sounded the alarm because “the specter of global food shortage looms in the coming months,” stressing that “if we do not feed people, we are fueling conflicts.”

He said that the war in Ukraine doubled the factors that contributed to the global food crisis and accelerated its pace, noting that these factors are climate change, the COVID-19 pandemic, and the widening gap between rich and poor countries.

The Secretary-General warned that the current crisis “could last for years” and “threatens to push tens of millions of people into food insecurity, malnutrition and starvation.”

“In just two years, the number of acutely food insecure people has doubled, from 135 million before the start of the pandemic to 276 million today,” he noted.

In a related context, US Secretary of State Anthony Blinken said that “22 million tons” of grain are currently in silos in Ukraine and are only waiting to be allowed to be exported.

The US Secretary explained that his country had decided to allocate an “additional $215 million” to combat food insecurity.

Safiya Al-Sayegh wins gold against the clock in «Khaleejia Kuwait»