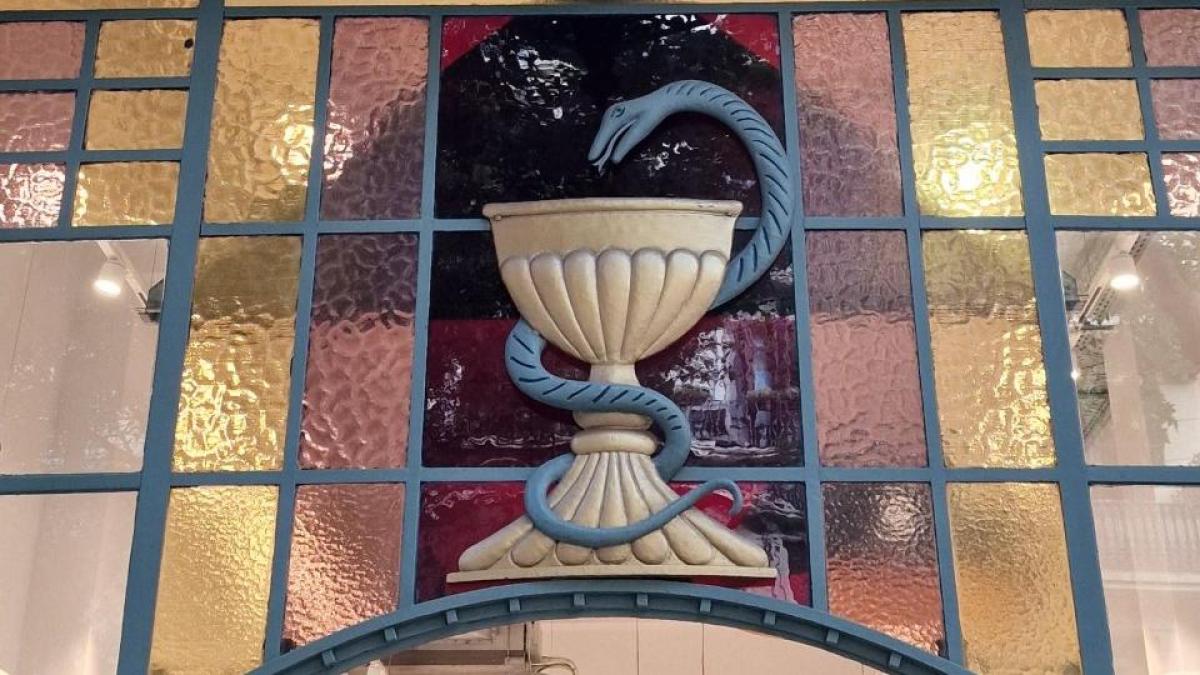 In the Museum of Public Assistance in Paris you can read this phrase: “Everyone should learn from everyone for the good of the patient. Humility is an evangelical virtue. The patient should benefit from all care.”

The pharmacy is one of the elements introduced by man that humanizes nature. The symbols of the professions are intermingled with the myths: the glass, the serpent, the cup or chalice of Hygea, the staff of Aesculapius and the caduceus of Hermes. And they survive today after many centuries of history.

Pharmacy and medicine have traditionally been linked since ancient times.

Pharmacists and doctors have always been motivated by human pain that makes us search the secret mysteries of nature for the best formulas to cure, relieve or console the earthly hope and the thirst for eternity of men. Respect for the person is largely made up of respect for their suffering.

The glass of the pharmacy has hidden the germ of the revolt, of the answer to the disease and the misfortune and fight against it. It has Promethean force.

Prometheus stole fire from the gods to give it to men who suffered from cold. The Promethean gesture is not only technical transformation, but also the fire of perfection and equality with the gods. The pharmacy glass expresses faith in oneself and opposition to being subjected to the hostile forces of high human desires. Pharmacy derived from farmaconwhich means medicine, poison or toxic.

The serpent is not just evil turned good. It is the emissary of the Earth that can heal or kill and depends on man’s attitude towards it. Knotted to the staff of Aesculapius or coiled in the caduceus of Hermes, it is a symbol of resurrection, of life, and it is a beneficial medicine that communicates the lower with the higher, nature with the sky.

Hygea is the goddess of hygiene and this word derives from her. Prevention symbol. An altar was dedicated to her near the Propylaea on the Acropolis.

Staff of Asclepius or Aesculapius. The cane, staff or rod of Aesculapius is the symbol of the medical profession. It appears in 800 before our era in the time of Homer. He lived in Thessaly and was venerated in Athens, Corinth, and Pergamum. He cultivated medical science with a deep humanistic sense and was later immortalized in mythology. A snake that sheds its skin every spring is coiled around the staff and is a symbol of rejuvenation, power, virility, wisdom, fertility, prosperity and health.

Caduceus of Hermes or Mercury (from cadux, ambassador or herald) are two intertwined serpents supported by two wings and was a gift from Apollo. Some confuse it with the rod, staff or staff of Aesculapius. He has different versions as a messenger of the gods and a god of commerce. Others claim that he invented alchemy and wore the inscription “curare tuto, cito et jacunde” (heal everything and pleasantly) on his helmet or helmet with wings. The famous German printer Froeben used it as his printing mark. It is said that with the caduceus Hermes slept or woke up mortals.

An inscription on an Asclepion or Athens in honor of Sarapion, distinguished as a Stoic philosopher and physician, reads thus:

“The doctor should be like a god, savior both for slaves, as well as for the poor, for the rich, for rulers and for all like a brother willing to offer his help.”

Different creeds aroused similar concerns in the sick. In the Christian orbit appear the figures of Cosme and Damian originating from Syria. Apprentices of Greco-Roman knowledge and trained in Arts showed an inclination towards medical-pharmaceutical science. Their vocation had a double aspect as doctors in the healing art and the response to the inner voice that called them to the service of others. They were baptized as “anargiros”, that is to say, those without money, detached and disinterested.

Another symbol and patron of pharmaceutical brotherhoods is Mary Magdalene, who healed the damaged feet of Christ with ointments.

Pharmacy and medicine have been closely linked throughout history and must continue to be so. A large part of the medical acts require the collaboration of the pharmacy.

In current times and learning from our roots, we must recognize that health is an inalienable and universal good (salvation smeans greeting, salvation). Science could be the continuation of the great intuitions contained in the myths.

It is desirable to convert the costs-benefits of healthcare into criteria of moral rationality towards pain and the needs of the patient. The classics taught us many centuries ago.

Get to know the author better

■ HOW CAN I PARTICIPATE IN THE LA VANGUARDIA COMMUNITY?

A family saved from a fire by neighbors in Wanfercée-Baulet: “It was hell, the fire started up again each time”, says one of them