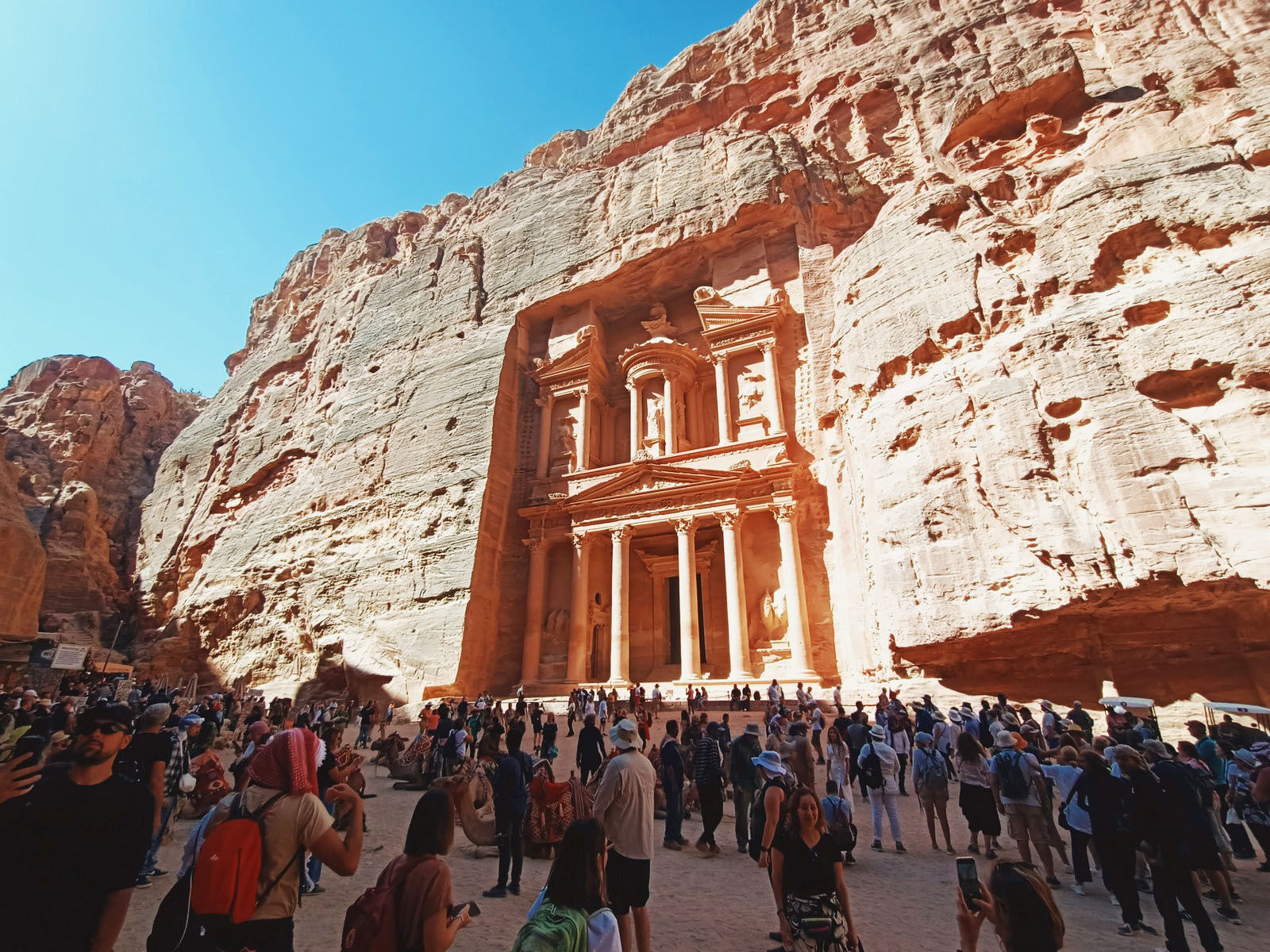 ComeA cold morning at The Musa. The sunlight was just beginning to filter through the mountains. Reached Petra Visitor Center around 6.30 am. From here you have to take a ticket to enter Petra, the most famous and world wonder of Jordan. There are fewer people early in the morning. As it is September, the afternoon will be hot. The winter season in Jordan begins in October. Petra was chosen early in the morning to avoid the midday heat. Entry here will start from six o’clock. The daily rate is 50 Jordanian dinars. That is about 5500 rupees. I got a Jordan pass that included the cost of visa and tickets in the tourist centers from the country itself, so I saved a huge amount of money here. For 60 dinars you can visit Petra (pronounced Petra in Jordan) for up to three consecutive days. There is also night access to Wadi Musa. A separate ticket is required for this.

When Jordan showed his pass at the counter, he got a ticket. Along with a manual in English. It includes everything to see and their route map. Keep enough water and food on hand. Those who have gone before have said that water and food inside Petra are at a killing price.

You have to walk further. There are big mountains around. They are red and rose in color. The first thing you see during the walk is the gin and blacks. Next to this is the obelisk tomb. These are the tombs created by the Nabateans, an ancient Arab people, in the first century AD. After that we reach near an old dam. It was built to escape the flood at that time. The Nabataean who were experts in hydrological engineering used to cut the rocks and make an 88 meter long tunnel to bring water to the dam.

In the wonderful world

After about a kilometer, the width of the path narrowed. The walk is through a narrow path known as the Siq. This is a terrible experience. The width of the road is less than three meters in many places. Huge rocks on both sides overhead. A small amount of light comes through. The feeling of traveling to some mysterious world. After traveling a distance of 1.2 km through this Sikh, we reach another world.

The first to see is the Treasury known as Al Khasneh in Petra. One of the most beautiful structures of ancient times, it is carved into the rock on the side of a mountain. It is more than 40 meters tall with gigantic pillars. Although this was a royal tomb, the name Treasury derives from the legend that pirates hid their treasure here. It is believed to have been built in the first century BC. With the end of the treasury, the view is full. The Nabataean and later Romans have prepared miracles on every mountain.

The way known as the Sikh of Petra

Petra is a vast world that stretches for kilometers. The royal tombs of the Nabataean period, the theater built by the Romans, the Nymphaeum used for water storage, the church believed to be built in the 5th century AD, the Colonnaded Street, the commercial street of ancient Petra, the vast temple built by the Nabataean in the 1st century BC, and the monastery ‘Ad There’ at the very end of Petra. There are countless sights and attractions here.

Looking at the map we started to see one by one. There is a difference between 200 and 300 meters between many. You have to climb the big mountains and see many views. Ad Deir Monastery has to be traveled through the mountains for about four kilometers. Camels and donkeys are available for rides for those who find it difficult to walk far. There are restaurants and souvenir shops in many places. In some places you can find shops selling ood and various spices.

As we descend to each of the sights in Petra, we are filled with wonder. You will be surprised when you think about how skillfully the people of that time built all these things. It makes you want to see firsthand how people lived here back then. The moment you felt like traveling back in time with a time machine. Every stone here has a thousand stories to tell?

The area around Petra is thought to have been inhabited since 7000 BC. The Nabataeans are believed to have made Petra the capital city of their kingdom in the 4th century BC. The Nabataeans were one of the Bedouin (nomadic) tribes who roamed the deserts of Arabia in search of pasture and water for their cattle. They settled in Petra and built a new civilization.

Petra is one of the New Seven Wonders of the World. The city was carved out of stone by the Nabataeans in prehistoric times. The Greek word Petra means stone. They carved temples, tombs and elaborate buildings out of the solid rock. More than eight hundred tombs are located here. At that time, Petra was an important center on the trade corridor to Arabia, Egypt and Syria. In AD 106, the area came under the hands of the Romans. With this, Petra flourished again. Historians record that at least 30,000 people lived here at that time. This country came under Muslim rule in the 7th century. The silver coins found here testify that they were a wealthy people. Many earthquakes have damaged the structures in Petra.

A view from a rock-cut cave

The existence of such a world among the mountains was a secret known only to Bedouins and Arab traders. In 1812, the Swiss explorer Johann Ludwig Burckhardt informed the modern western world about this region. He came here as a Muslim disguised as a strategy. The caves were inhabited until 1984. However, fearing the destruction of ancient structures in Petra forced the people to move to Wadi Musa. Now Petra has set the stage for many Hollywood films.

After seeing the sights, he came back in front of the treasury. It’s not like it was in the morning. This place is full of tourists. They are amazed at the wonder of the world. By taking selfies and recording videos, they preserve the wonder for tomorrow’s memories. Most of the tourists are from western countries. The number of Indians is comparatively less.

Roman theater and other structures at Petra

We spent about six hours in Petra. It really takes days to study and understand everything here in detail. Started returning in the afternoon. Even then the arrival of people has increased. Elderly people come in electric vehicles. Reached the visitors center around 1 o’clock. There is a museum here. Many of the objects used in Petra can be seen here.

Alighted from the museum and wandered around the city. Wadi Musa is a beautiful little town on a hill. Golden buildings stand out among the brown hills. Wadi Musa is 250 km away from the capital Amman. Today the city depends on tourism. Majority of the people of the city belong to the Layatna tribe. Many still rely on horse-drawn carriages for travel today. Horses’ hooves and ears rustled along with the rumble of vehicles as they walked through the streets.

It is also the land named after Prophet Musa. It is believed that Prophet Musa passed through the valley with his people and drew water by striking the rock here with a stick. This spring is located in the city itself. It is a major pilgrimage center today. The Nabataean’s built canals that carried water from this to the city of Petra. In this way, many pilgrimage centers related to Islam, Judaism and Christianity can be found in Jordan. But, as is happening in our country, no spiritual exploits can be found around them.

Time to say goodbye to Wadi Musa and Petra. Tariq got into the taxi car. After passing the city, the car stopped at a place on top of the hill. Then he pointed far into the distance and said, ‘Petra is hiding in those mountains that you see.’ No one understands that such a vast world exists in between. The Nabataean people were saved from foreign attacks for a long time because they could not be discovered by anyone from the outside world.

Tariq also showed me the biggest mountain here. Its name is Jebel Haroon. It is said that Prophet Musa’s brother Haroon was buried here. There is a small church on top of this mountain. It is also a pilgrimage center. You have to walk for kilometers to reach it. Swiss explorer Johann Ludwig Burckhardt came to Mount Harun as a pilgrim to learn about Petra and inform the outside world. Got back in the car. Now the target is Wadi Rum, also known as Mars on Earth. Wadi Musa and the mountains guarded by Petrak were fading from view as Tariq’s chariot sped along.

Distant view of Wadi Musa city. Petra is between the mountains on the left

Part 1 –Extraterrestrial lives
Part 2-A Malayalam song to the beat of Daffin in the Roman theatre
Part 3 –Israeli soldiers by the Jordan River and two rocks named after Lot!