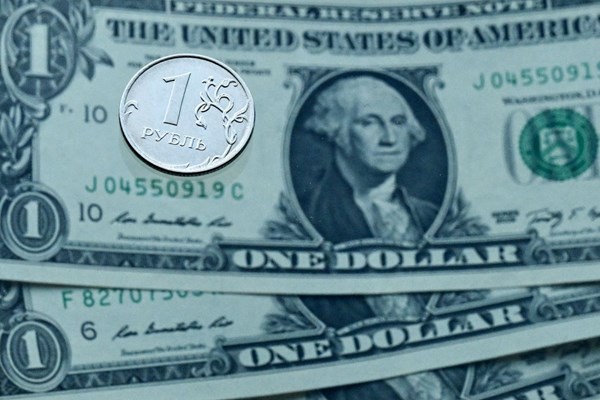 MOSCOW (Reuters) – The Russian ruble rose more than 6 percent in volatile Moscow market on Monday, reversing some of its sharp losses last week, as it was supported by curbs on capital movements and a stronger balance of trade for Russia. The ruble plummeted last week, after the central bank cut interest rates and signaled further cuts. The prospect of easing restrictions on capital movements and a possible default on sovereign debt added to the downward pressure on the Russian currency. The ruble ended the trading session in the Moscow market today, up 6.67 percent at 62.25 against the dollar. On Wednesday, it was 55.80 against the dollar, its strongest level since February 2018, before falling to 66.70 by the end of the week. Against the euro, the ruble rose 7.73 percent to 64.30, after hitting a seven-month high of 57.10 on Wednesday, at the height of tax payments at the end of the month that usually pay export-focused companies to convert their foreign currency to meet their obligations. Backed by curbs on capital movements, the ruble jumped to become the world’s best performing currency this year until its plunge last week. The ruble was also supported by new payment terms for gas for buyers in the European Union that require them to convert foreign currency into the ruble, and a drop in imports.