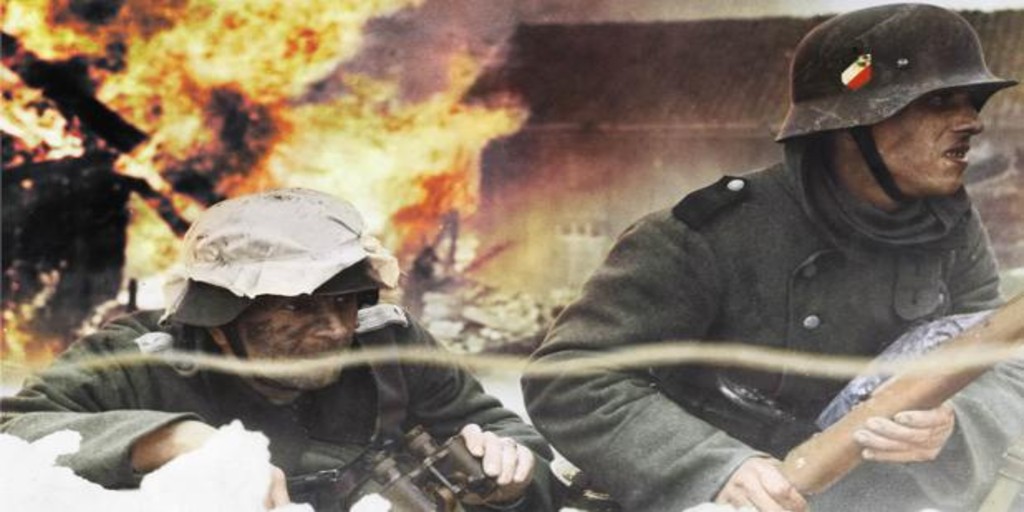 In recent years, digital technology has made it possible to restore and color black and white photographs with a quality that defies the eye, which forces us to look into the eyes, more alive than ever, to Manfred von Richtofen, nicknamed the Red Baron’, with his red plane behind, already scrabbling among the golden ruins of Aachen in October 1944.

The rain of color takes today’s viewer out of their comfort zone, hits them and demands that they review, with more misery and realism, the mental constructions that float in the collective imagination about certain historical events. The dead are more dead. The greenest or withered landscapes. The steel of arms, more resplendent … This is the case in the new book of photographs by
Desperta Ferro Ediciones

titled ‘The world on fire’.

The long war in Europe

After the success of ‘The color of time: a visual history of the world 1850-1960’, this publishing house specialized in military history has just published a continuation, by the same authors, focused on the long war that swept the world between 1914-1945 .
‘The world on fire’ is a hardcover study of the First and Second World War in full color and with short texts explaining each print in historical context.

‘The long war 1914-1945’ chronicles the crucial time that goes from the assassination of Archduke Franz Ferdinand in Sarajevo to the annihilation of Hiroshima, a “long war” that not only included the two global conflicts, but all the military and social conflicts that dotted the interwar period. For this, two hundred images are digitally restored and painstakingly colored.

Of the muddy ones Somme trenches to the barges of the Allied D-Day landing, from the icy ruins of Stalingrad to the scorching cliffs of the Rif, from unrestricted submarine warfare to the aircraft-studded skies of the Battle of Britain, from the oppressive streets of the Warsaw Ghetto to jubilation of the celebrations in liberated Europe… The digital artist Marina Amaral, known as “the master of the coloring of the photographs”, signs the edition of the images, while the historian Dan Jones provides the written comments. Very short texts, accompanied by chronologies, but which summarize to the millimeter what each photograph means today.

Historian Dan Jones He approached the Brazilian artist, who had been working with museums, publishing houses and magazines for years, to ask if she would be interested in collaborating on a book. The photographer had written, without response, to publishers offering to publish her work, so Jones’ offer was the fastest way for them to see colored photographs that, in many cases, require entire days of work to produce a single snapshot.

“The perfection and realism of the images could lead us to think that they are created by an algorithm, but in reality it is an old-school work: the hero as an artist”, explains Dan Jones himself about Amaral’s work.

Behind such spectacular results are hidden not only many hours of work, but also a deep investigation to discover what original colors the images had. Wherever the grayscale is not capable of saying anything other than light or dark, it is time to draw on artistic genius, imagination and documentation. To find out what color a uniform was or how probably rusty a weapon was, Amaral can only look up the answer in books and by asking historians and experts as if she were a time detective.

As the opening of the chapter entitled ‘1936-1939: Darkness is hovering’, the illustrated book has two photographs of the Civil War in Spain, a foretaste of the terror that was about to reach all of Europe. One of the images is made by the American Margaret Bourke-White, from ‘Life’ magazine, with the scribbled annotation “Spain-Ángeles González-7 years old-refugee from Madrid”. It is a portrait of a girl with an angry face and some poor food in her hand.

The other, by the same author, reflects the dead and wounded on the road after the national bombardment of Lleida in November 1937. This air attack by the Condor Legion resulted in the death of hundreds of people, including forty-eight children. and their teachers who attended to the School Lyceum. As Dan Jones explains in the book, the presence of Nazi planes in Spain was due to two reasons: «To divert international attention from Germanic designs in Central Europe and to provide a testing ground for military equipment that would be used in the future war. European ‘.

“What matters now is to generate money”: the Real-Barça clasico in Saudi Arabia creates controversy