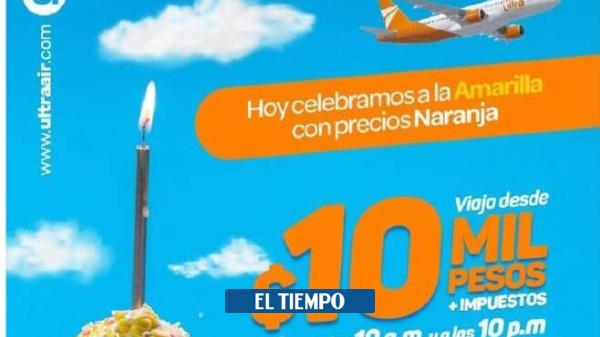 The Transport Superintendence This Thursday a new investigation was opened to the low-cost airline Ultra Air, that on Wednesday, May 25, published a promotion on its website, social networks and email, offering air tickets at 10,000 pesos more taxation.

According to the airline Ulta Air on its website and on networks such as Facebook, Instagram and Twitter, the offer was to travel between May 26, 2022 and February 28, 2023 if the routes are with origin and destination in Bogotá, or until April 30, 2023. for the other routes.

(You may be interested: Ultra Air: Supertransport opened a formal investigation after complaints)

Through resolution 1690, on May 26, 2022, that is, one day after the offer, the control and surveillance agency formulated a statement of charges to the aviation company for the alleged breach of literal f) of section 5,140 of the Aeronautical Regulations of Colombia -RAC 5-, which provide for the publication and information on rates.

According to this rule, the commercial air services companies of regular public transport, travel agencies and intermediaries, must publish and inform the public of the total price to be paid for the air transport service including concepts such as taxes, rates, fees, additional charges; as well as, all other values ​​in which the passenger must incur; which must be duly disaggregated, regardless of the medium used in their distribution.

(Read also: Airlines: the new destinations and competitors that debut in the countryl)

The second charge that Supertransporte decided to investigate Ultra Air for this offer is for the alleged breach of the provisions of articles 29 and 30 of the Consumer Statute (Law 1480 of 2011), which enshrine the prohibition of disseminating misleading advertising.

“The airline Ultra Air SAS, allegedly incurred in misleading advertising by spreading messages and information that would have misled or deceived users of the air transport service, by creating false expectations with the announcement of tickets at a price that is not the total to pay for the air transport service”, states one of the sections of the resolution.

The investigation followed a complaint filed by the company. Weather in Aviancathrough filing number 20225340750322.

The resolution ordering the opening of the investigation was signed by Álex Eduardo Herrera Sánchez, Director of Investigations for the Protection of Users in the Transport Sector of the Superintendency of Transport, and granted Ultra Air SAS a period of 15 business days from the notification to present discharges. , and request and/or provide the evidence that it intends to assert, in accordance with article 47 of the Code of Administrative Procedure and Administrative Litigation

Health: Monitoring hundreds of “infections” of acute hepatitis in children

A free demo of Mario Strikers: Battle League available on the eShop