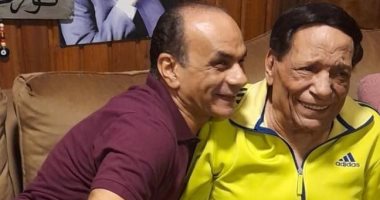 A recent photo of the leader has just been published Adel Emamat his home with one of his friends, which reassured the audience of the great artist of his health, as the leader seemed to be in good condition and laughing with his friend at his home, so that his smile and laughter eliminated all the rumors that affected the leader in the past periods.

The photo was published by Adel Muhammad, one of the friends of the leader, Adel Imam, on his page, and he commented on it, “Now the leader is together every year and you are good,” and the photo won the admiration of a large number of Facebook pioneers.

A large number of artists had congratulated Adel Imam through their own accounts on social networking sites, through a group of nice messages or pictures of their gathering with the leader from cinematic or dramatic works, or meetings they gathered on various occasions.

On the occasion of his birthday, producer Issam Imam, brother of the leader, Adel Imam, confirmed in statements to “The Seventh Day” that the cinematic works closest to his heart, and who loves to watch the movie “A groom from a security side”, which was a strong start for the star Sherif Mounir and Hala Shiha, indicating that he also loves films “Terror and Kebab”, “Al-Mansi” and “Salam, my friend”, thank God, all achieved great success as one of the most important stars of Egypt and the Arab world.

With regard to dramas, Issam Imam said that they are all close to my heart, including the series “Sahib al-Saada” and “Al-Araf” and other works presented by the leader in his artistic career, which spanned more than 50 years.

The cooling system of the reference GeForce RTX 4090 Ti appeared in the photo – like the GeForce RTX 3090 Ti, but even more

Stock market: what is moving in the markets before the opening on Tuesday