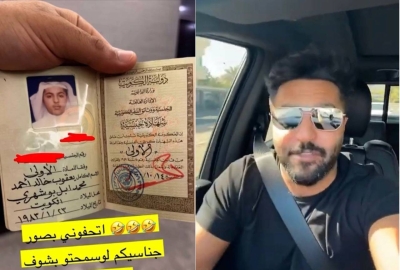 Al-Marsad newspaper: The famous social networking sites, Yaqoub Boushahri, settled the controversy over his affiliation with the State of Kuwait, as well as his relationship with Abdullah and Mahmoud Boushahri.

And “Bushhari” added, in a video he posted on his personal account on “Snapchat”: that he has nothing to do with “Abdullah and Mahmoud Boushehri,” saying: “My quarter, my beloved, my brothers and a crown on the head and I honor them, but they are not relatives of me, neither from afar nor from close. As he put it.

In response to those who questioned his nationality, Boushahri affirmed that he is of Kuwaiti nationality, born in Kuwait, and not Iranian, as he is promoting.