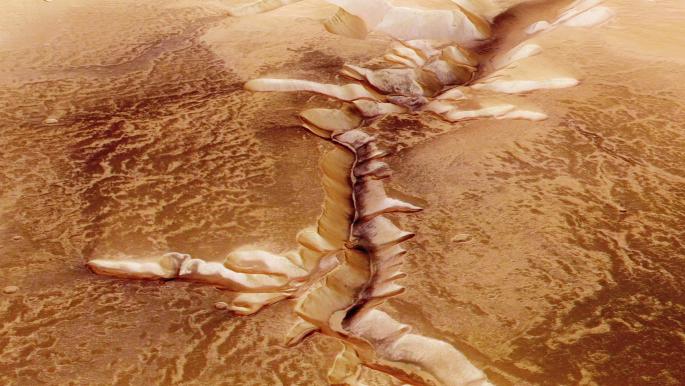 Dry riverbeds are evidence that Mars had a habitable climate (Getty)

About 3 billion years ago, it was Mars Just like the earth. A warm planet with liquid water on its surface. But then, the planet suddenly cooled, and the water disappeared from its surface and became the red dusty desert planet we know today.

The loss of greenhouse gases, specifically carbon dioxide, as the current prevailing hypothesis says, led to a climate catastrophe on Mars. But American scientists point out that this assumption is illogical, and it cannot be reconciled with the climatic history of Mars.
Instead, there must have been other causes that played a decisive role in the cooling red planet Water is drawn from its surface. The scientists published their paper in the peer-reviewed journal Science Advances, although they were keen to show that they could not accurately answer this question.

Dry riverbeds, fluid flow paths around volcanic craters, and areas that appear to have been vast oceans are all indications that Mars had a habitable climate. Perhaps at that time, between 3 and 3.6 billion years ago, life on Mars was just as it is on Earth. Perhaps simple, single-celled organisms that have the ability to resist, have survived these harsh climatic changes, and are in the soil of Mars to this day.

The main question in the paper was: Why did our neighbor Mars suddenly cool by an average of ten degrees 3 billion years ago? By studying the structures of water, a team of scientists from the Chicago community, led by Edwin Kite, was able to give a hypothesis about the history of Mars. The hypothesis studies the climatic changes that occurred on Mars and the water structures that have shifted in parallel with climate changes.
The team simulated the climate of Mars, and simulated the changes that took place. The density and chemical composition of the atmosphere, as they are critical factors in any climate model, were studied, then the greenhouse gases that normally contribute to warming the planet were measured. Through these simulations, the researchers found surprising results.

The prevailing theory in planetary science was that the gradual loss of carbon dioxide from Mars was the reason for the cooling of the Red Planet. But simulations found that this hypothesis could not be correct, and climate change was not primarily driven by the loss of carbon dioxide, but rather by other effects. However, scientists have not been able to pinpoint these factors precisely, or derive an accurate model from simulations. They consider that the decrease in water vapor in the atmosphere and the formation of clouds of ice crystals in the atmosphere of Mars are possible reasons, because they absorb and prevent the arrival of a large proportion of solar radiation.

Of course, the loss of CO2 played a role, but it is not the only decisive one, as might have been expected. It is not yet clear whether climate change is a cause of the disappearance of water, or the disappearance of water is a cause of climate change. All of this will become clearer as more results come in from the analyzes of soil samples that are now being conducted on several operational missions to the planet.

Bus losing its fuel in Nivelles: an expertise proves the driver right

Knowing the doctor in the first week of being diagnosed with sequelae: 4 kinds of people are easy to get the new crown – yqqlm