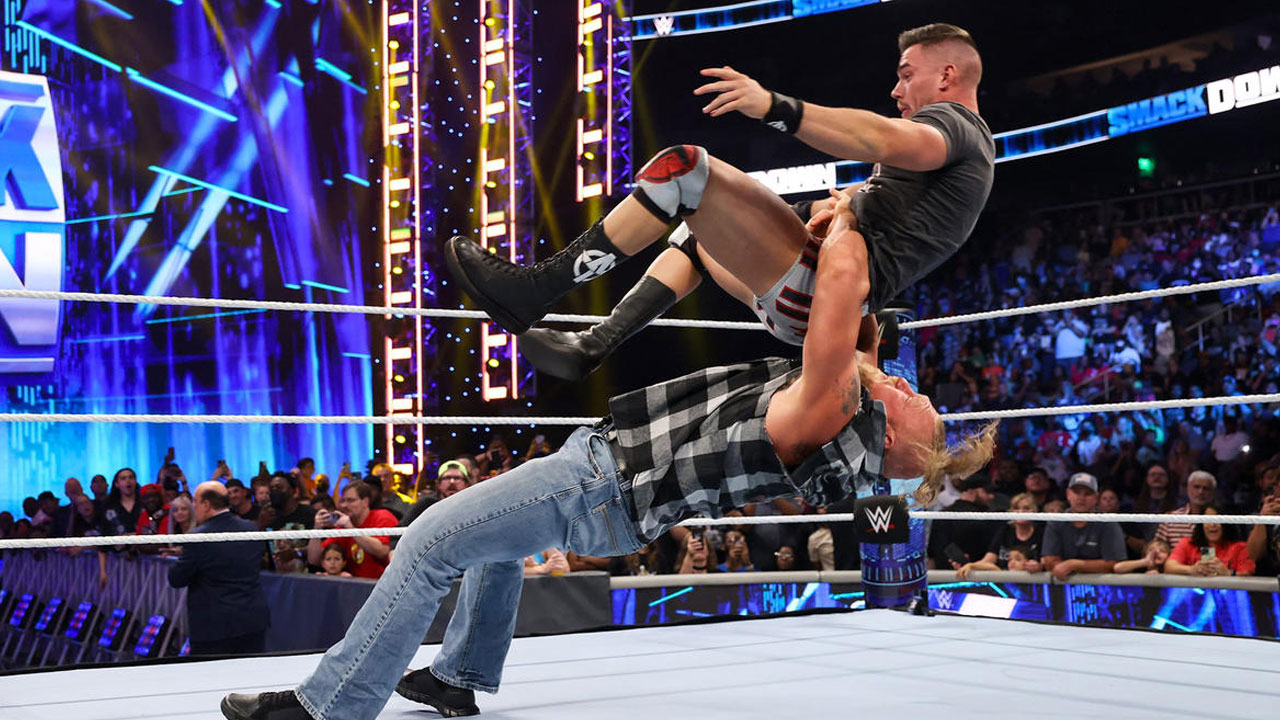 The commentators are Michael Cole and Pat McAfee.

– Tonight is WWE SmackDown, the blue show starts with the commentators who welcome us and show us the scenery for the first match of the evening, then Drew McIntye arrives in the ring… but he is attacked by Sheamus and the match begins once both wrestlers are in the ring!

At the end of the match, Sheamus wants to do his Brogue Kick on Drew McIntyre but the latter carries him and knocks him through a table placed in the ring. Sheamus crawls… but Drew McIntyre lands a final Claymore Kick for the pinfall victory!

– After his victory, Drew McIntyre is interviewed by Kayla Braxton. He tells us that someone has to take the title away from the part-time champions… Theory attacks him from behind with his Money in the Bank briefcase!

– We see Happy Corbin’s attack on Pat McAfee last week. After that, we see Corbin coming to ringside with a ticket in hand. The commentators present us with the map, but Corbin ends up going over the barricade to attack McAfee. Security arrives to separate them…before Happy Corbin kicks him in the private parts…ouch!

On his way, Theory meets Paul Heyman who will talk to him off camera.

At the end of the match, Shotzi makes a DDT on Aliyah then continues with the fall for the victory.

– Backstage, Ronda Rousey and Liv Morgan go face to face. Natalya joins them and tells Liv Morgan to enjoy her days as champion because Ronda Rousey is going to beat her in record time. Sonya Deville arrives and recalls that Ronda Rousey attacked her after being beaten by Raquel Rodriguez last week.

– Back in the ring, Shotzi laughs and even before finishing her first sentence, the music of Ronda Rousey cuts her off then the former champion goes to the ring to attack Shotzi. Rousey takes the microphone and says people are complaining about not being in the title match. She asks Liv Morgan to come to show why they are the ones who will fight for the title at SummerSlam.

At the end of the match, Liv Morgan made her Oblivion on Natalya, while Ronda Rousey tapped Sonya Deville with the Ankle Lock.

– After their victory, Ronda Rousey and Liv Morgan face off and the champion lifts her belt.

– The Street Profits then the Usos make their entrance. Jeff Jarrett (special referee for their match at SummerSlam) also gets in the ring and says he has a few words to say to both teams. He thinks it’s a good idea to get them together tonight to clear things up. He takes his job as a referee very seriously. Both teams ask what would be considered a disqualification. Jeff Jarrett replies that he is not there to limit them, he is there to let them run wild. He has a mission: to do the pinfall when there are two shoulders on the ground.

A fight breaks out between the two teams, but Jeff Jarrett ends up taking a Superkick from Jey Uso by mistake! The Usos feel bad and Jarrett pushes them away as he gets up. Angelo Dawkins knocks The Usos out of the ring and then Montez Ford jumps over the top rope to land on the champions.

– A video of the Maximum Male Models is broadcast, they present the Beachwear collection to us with the return of Max Dupri.

At the end of the match, the Viking Raiders double chokeslam Kofi Kingston followed by the pinfall for the victory.

Paul Heyman hands him his microphone, Brock Lesnar approaches him… but Theory attacks him in the back with his briefcase! Except that Brock Lesnar defends himself and propels him out of the ring after a few German Suplexes. Theory walks off stage and a fiery Drew McIntyre comes out of nowhere to give him his Claymore Kick!

The show ends with a face to face between Brock Lesnar and Drew McIntyre.