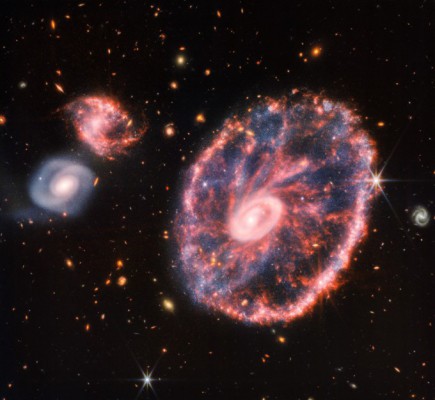 The appearance of the ‘Wagon Wheel Galaxy’ resembling a round wheel. Provided by the National Aeronautics and Space Administration (NASA)

The National Aeronautics and Space Administration (NASA) released a picture of the ‘Wagon Wheel Galaxy’ that resembles a round wheel, photographed by the James Webb Space Telescope (JWST) on the 2nd (local time). In the photo, the red light and the internal structure were vividly captured. It is a structure that could not be observed with previous space telescopes as it was covered with cosmic dust. It is evaluated that JWST, which started full-scale scientific observation last month, is producing results one after another.

The Wheelbarrow Galaxy is located about 500 million light-years away in the constellation Sculptor. It is a ‘ring galaxy’ with two rings at the center and at the outer edge. Compared to spiral galaxies like our own, ring galaxies are much rarer. Scientists analyze that a large spiral galaxy collides with another galaxy at high speed and then changes its structure and shape, forming a cartwheel shape.

“Analysis of images of the Wheelbarrow Galaxy shows that when a stone falls into a pond, the two rings seem to extend outward like waves spreading out from it,” NASA said. It means that it will continue to change in the future.”

An image of a wheeled galaxy captured by the Hubble Space Telescope in 2018. Courtesy of NASA

The tone continues to rise following the arrival of Pelosi in Taiwan: “Those who offend China will be punished”