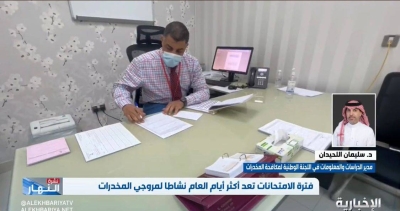 Al-Marsad Newspaper: The Director of Studies and Information at the National Anti-Narcotics Committee, Dr. Suleiman Al-Luhaidan, revealed the monitoring of new chemically manufactured narcotic substances that began to appear around the world and spread in the Kingdom like Shab. Noting the seriousness of its effect on the mind even after recovery.

Al-Luhaidan explained, during his intervention with Al-Ikhbariya channel, that narcotic substances are widespread in all countries of the world, but certain types appear in the Kingdom, such as Captagon and hashish, pointing out that the promotion of these drugs is periodically thwarted in some seizures.

Regarding the emergence of synthetic drugs that have recently begun to appear and their toxicity, Al-Luhaidan said: “There is a recent trend by some groups to take new or modern narcotic substances that are manufactured in purely chemical laboratories and are exported to the Kingdom, such as Shabu and some other substances, in addition to some restricted drugs that are only authorized for use by some. patients, but unfortunately it has become misused.”

He referred to the danger of manufactured drugs, saying: “These narcotics are chemically manufactured, and their effect is unfortunately very strong and severe, and their destruction of the mind and brain is very dangerous. They also cause psychosis and mental disorders, and after recovery, the person may not return to normal.” He added: “They are also sold in a black market that is not subject to any censorship and anything can be placed inside it even if it is fatal to a human being.”

With regard to how the family knows the type of manufactured drugs that the teenager uses: He said, “Depending on the type of substance, there are hallucinogenic substances and others that cause abnormal activity in the human body, but in general if the person’s behavior changes and symptoms such as “tremor, red eyes, sleep disturbances, and appetite change, increase or decrease.” He called on the family to consult specialists if any of these symptoms appear on their children.

Video | Director of Studies and Information at the National Committee for Drug Control, Dr. Suleiman Al-Luhaidan:

New chemically manufactured narcotic substances have begun to appear around the world and spread in the Kingdom, such as Shab, and their effect on the mind is profound even after recovery. #day_news#news pic.twitter.com/sizwuW1Nbz

What you need to know about alopecia, the condition that Jada Pinkett Smith suffers from